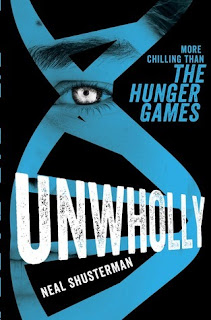 Thanks to Connor, Lev, and Risa — and their high-profile revolt at Happy Jack Harvest Camp — people can no longer turn a blind eye to unwinding. Ridding society of troublesome teens while simultaneously providing much-needed tissues for transplant might be convenient, but its morality has finally been brought into question. However, unwinding has become big business, and there are powerful political and corporate interests that want to see it not only continue, but also expand to the unwinding of prisoners and the impoverished.

Cam is a product of unwinding; made entirely out of the parts of other unwinds, he is a teen who does not technically exist. A futuristic Frankenstein, Cam struggles with a search for identity and meaning and wonders if a rewound being can have a soul. And when the actions of a sadistic bounty hunter cause Cam’s fate to become inextricably bound with the fates of Connor, Risa, and Lev, he’ll have to question humanity itself.

Rife with action and suspense, this riveting companion to the perennially popular Unwind challenges assumptions about where life begins and ends—and what it means to live

I have been so disappointed of law with sequels which needn't have been written that only leave me feeling that the author is out to drag out and make as much as money as possible when the story's doesn't need to be told. I am very pleased to say this was not one of those books. I really enjoyed unwholly, thought it was a brilliant sequel to unwind and am hoping there's more to come.

To start I loved that the book started with its own little recap of all the key ideas, terms and people from book one so I could get my head back round all the things that I'd found out about but probably forgotten from book one. It meant that I found it really easy to slip back into the world without too much confusion.

I loved that unwholly was fast paced and just as harrowing as unwind. The ideas thrown about made you think as much as the ones in the first book and the cation was just as nasty in places. I enjoyed getting to now my favourite characters from book one again but I also loved the new ones that you met as the book went on.

A wonderful sequel to what is proving to be a strong series which I am thoroughly enjoying.