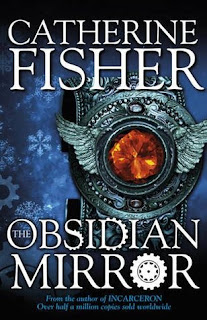 Jake's father disappears while working on mysterious experiments with the obsessive, reclusive Oberon Venn. Jake is convinced Venn has murdered him. But the truth he finds at the snow-bound Wintercombe Abbey is far stranger ... The experiments concerned a black mirror, which is a portal to both the past and the future. Venn is not alone in wanting to use its powers. Strangers begin gathering in and around Venn's estate: Sarah - a runaway, who appears out of nowhere and is clearly not what she says, Maskelyne - who claims the mirror was stolen from him in some past century. There are others, a product of the mirror's power to twist time. And a tribe of elemental beings surround this isolated estate, fey, cold, untrustworthy, and filled with hate for humans. But of them all, Jake is hell-bent on using the mirror to get to the truth. Whatever the cost, he must learn what really happened to his father.

Obsidian mirror is an really interesting read and one of those books I want to reread again soon as I think I'll get as much, if not more, from a second reading.

The book itself is written in such an unusual way. It switches between protagonist and between past and present alongside extracts from documents from the world in which it is set and as a reader I felt very much like I was piecing together a jigsaw puzzle as I went along working out little by little how everything fit together.

The story is set around the disappearance of Jake's father and follows his story as he moves in with his godfather who he suspects is to blame for his father's disappearance. Once he arrives at the abbey his godfather owns he finds himself drawn into a weird world of experiments with a strange mirror in a bid to locate his father.

I must admit towards the end of the book I was thinking that I wasn't sure if I wanted to worry about carrying on with the series. While I was enjoying the book I didn't know if there was enough for me to want to carry on especially after a year or more will have passed by the time I would be able to get a copy. However my mind was completely changed with the last chapter and the revelations that came with it that left me needing more

Nikki in Niagara said…
Sounds interesting! I'm getting to the point now though that I want to wait till the last book is out before I start a series.
9 October 2012 at 02:39