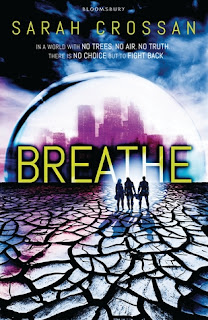 When oxygen levels plunge in a treeless world, a state lottery decides which lucky few will live inside the Pod. Everyone else will slowly suffocate. Years after the Switch, life inside the Pod has moved on. A poor Auxiliary class cannot afford the oxygen tax which supplies extra air for running, dancing and sports. The rich Premiums, by contrast, are healthy and strong. Anyone who opposes the regime is labelled a terrorist and ejected from the Pod to die. Sixteen-year-old Alina is part of the secret resistance, but when a mission goes wrong she is forced to escape from the Pod. With only two days of oxygen in her tank, she too faces the terrifying prospect of death by suffocation. Her only hope is to find the mythical Grove, a small enclave of trees protected by a hardcore band of rebels. Does it even exist, and if so, what or who are they protecting the trees from? A dystopian thriller about courage and freedom, with a love story at its heart.

I must admit that while I was intrigued by this book when I was first offered it for review I didn't immediately pounce on it. There are so many dystopian novels out there of various quality and I wasn't sure if I needed to get into yet another series. However I did finally start it and found myself telling myself off for not having done so sooner.

Put simply I really enjoyed Breathe and loved its take on a dystopian future.

There were several things I enjoyed about the book.

Firstly I loved the three different characters and seeing the world from their various points of view. Alina is tough and feisty and a member of the resistance, Quinn is cute and a member of the more privileged section of society who have money and therefore access to as much oxygen as he needs and Bea his best friend who desperately wants him to notice her and above all is fiercely loyal to those she loves. I loved them all in their different ways and enjoyed following them as the book went on.

The plotline and ideas behind the book were fascinating. The world is one where oxygen is in short supply after the collapse of society as we know it. Since the switch Richer people can afford oxygen tanks and therefore can carry on life as they lease whereas the poorer people in society have to restrict their activities so not to face punitive taxes for using more than their allocated quota of oxygen.

The story really kicks off once the three main characters end up leaving the pod they live in and go off into the wastelands. I won't give you any detail about what happens once they leave so not to spoil the book for you but I will say that I really enjoyed following their story and getting into the reasons why Alina in particular was a member of the resistance. I found there were some brilliant twists and turns thrown in and you meet some fantastic secondary characters.

All in all a book I really enjoyed.

Mel said…
I loved Alina's character as well. The idea of oxygen restricting your activities was interesting and I am looking forward to another book in the same world! :-)
17 October 2012 at 15:56