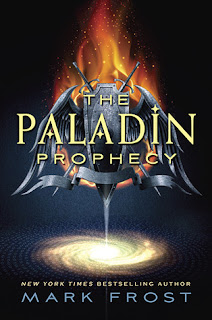 Will West is careful to live life under the radar. At his parents' insistence, he's made sure to get mediocre grades and to stay in the middle of the pack on his cross-country team. Then Will slips up, accidentally scoring off the charts on a nationwide exam.

Now Will is being courted by an exclusive prep school . . . and is being followed by men driving black sedans. When Will suddenly loses his parents, he must flee to the school. There he begins to explore all that he's capable of--physical and mental feats that should be impossible--and learns that his abilities are connected to a struggle between titanic forces that has lasted for millennia.

Co-creator of the groundbreaking television series Twin Peaks, Mark Frost brings his unique vision to this sophisticated adventure, which combines mystery, heart-pounding action, and the supernatural.

The Paladin prophecy is an exciting new novel from the co author of Twin Peaks. It's fast paced and exciting with a brilliant lead character and lots of interesting ideas which I'm sure will make for an exciting series overall.

The paladin prophecy follows the story of Will West. Will has spent his life in the shadows actively not standing out amongst his peers until one day when he aces a test and offered a place as a prestigious academy. From that moment on things start to go strange for Will. He is chased by strange men and creatures and something isn't quite right with his parents. Will decides to escape and gets himself across the country to the school but he isn't even safe there.

I won't tell you too much about the storyline because I don't think I could do it justice as there are so many twists and turns and ideas thrown out there that I couldn't begin to tell you about it all without spoiling something. I will tell you however that you can tell that this book was written by one of Twin Peaks writers as it is weird and wonderful and sometimes whilst reading it I thought I was going slightly insane. I also loved Will West. I thought he was a brilliant character who I wanted to root for from the first to the last page. Loved his ways and I loved how he was with his new group of friends.

All in all an exciting and different read. Well worth a look. I'm very much looking forward to continuing on with the series.

Michelle Fluttering Butterflies said…
Weird and wonderful sounds great! I'm hoping to read this book in the next few weeks! :)
24 October 2012 at 12:16

Anonymous said…
This is one I'm pretty sure I have a copy of. It certainly sounds familiar, anyway. Though I know I haven't read it yet, but seeing that it's one with a good deal of promise, I might dig it out and bump it up the list by a few places. Thanks for the commentary!
24 October 2012 at 13:19