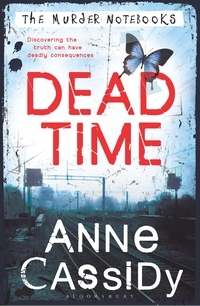 When Rose was twelve, her mother and stepfather went out for dinner and never came back. Now seventeen, she lives with her grandmother and goes to school in London. She’s always wondered about her stepbrother, Joshua, whom she only lived with briefly and who was also relocated after their parents’ disappearance. When Rose and Joshua meet again, they find they have much in common, including a desire to uncover the mystery surrounding their parents’ disappearance . . . and a mutual attraction to each other. But when Rose witnesses the murders of not one but two of her classmates, she must uncover who is behind these violent crimes. And when she and Joshua discover that a much larger conspiracy is underway, both of their lives will be in danger. From international bestseller Anne Cassidy, this first in a fastpaced and romantic new mystery series will keep readers guessing.

I've had Dead Time on my TBR pile for ages and wish I'd got round to it earlier.

The story is a fast paced crime thriller which follows the story of Rose a teenage girl whose mother disappeared 5 years previously. I can't tell you too much about the story line itself as I will spoil it for you but will say that the story will keep you guessing throughout.

For me the thing I enjoyed most was the relationship between Rose and her step brother, whose father went missing with Rose's mother. Are 5 years apa to two have been recently reunited. I love the way in which they interact together and also like seeing the different ways they went about dealing with the loss of their parents.

I liked Rose as a character. You get a real sense of just how lost she is since the disappearance of her mother. She's now living with a grandmother who disapproves of her and the choices she makes even though she isn't a wild child or tear away.

For me the things really kicked off in the last few chapters in the book where lots of things are set up for the rest of the series and blown wide open changing the world entirely for both Josh and Rose.

All in all a brilliant start to a series which has the potential to be very exciting.

Raimy from Readaraptor Hatchling said…
I really enjoyed this one too and definitely agree that the last few chapters kicked off what looks to be a great series :) I cant wait for the second book!
29 October 2012 at 22:42

Michelle Fluttering Butterflies said…
Yay! I really loved this one too and I cannot wait to read more in the series :)
1 November 2012 at 21:24