Review: Time between us by Tamara Ireland Stone 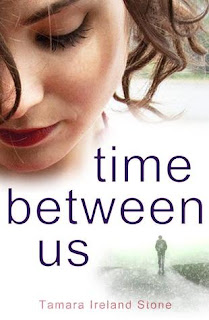 Anna and Bennett were never supposed to meet: she lives in 1995 Chicago and he lives in 2012 San Francisco. But Bennett’s unique ability to travel through time and space brings him into Anna’s life, and with him, a new world of adventure and possibility.

As their relationship deepens, they face the reality that time might knock Bennett back where he belongs, even as a devastating crisis throws everything they believe into question. Against a ticking clock, Anna and Bennett are forced to ask themselves how far they can push the bounds of fate—and what consequences they can bear in order to stay together.

I really enjoyed this read and I felt the comparison to The Time Traveller's Wife is spot on.

I also loved the relationship Anna has with her best friend. I liked seeing that bond between two girls ... to be fair I'm probably jealous never having a girly best friend as a teenager!

The only thing I can complain about is I felt the end of this book was rather rushed which I felt was a shame because the rest of the book was so well paced throughout.

A fab debut novel and such a relief to get a book which is a stand alone and not a trilogy!

Raimy from Readaraptor Hatchling said…
good to see you enjoyed this one! I cant wait to read me copy and yay, standalone! I'm geetting a bit bored of series'
7 October 2012 at 10:29