Why everyone should watch Firefly

November 29, 2011
Yes I know my blog is about books but in this case I am about to make an exception to tell you all why you should watch Firefly 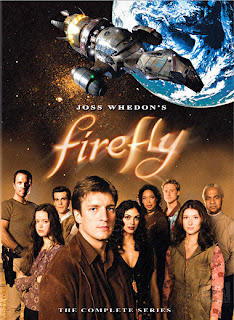 Firefly is absolutely without a shadow of the doubt the best thing to ever have graced our TV screens. I am not one for watching a huge amount of TV (Until last week I didn't even have a TV signal in our house) but I absolutely love this. Hadley and I just finished rewatching the series for the third or fourth time and it absolutely still holds all the magic it had when I watched it the first time around.

Firefly was created by the genius that is Joss Whedon (for those of you who don't know he created Buffy the Vampire slayer). It is described as a Western set in Space and is nothing like anything else you will ever see on TV. It ran for 13 episodes and had a film called Serenity which continued and tied up the story somewhat.

The real brilliance of the series is in the characterisation and the world that is set up around those characters. The series is set in the distant future. All superpowers except USA and China have gone. People have fled the earth and set up new worlds across other galaxies. This therefore means the people you meet are an extraordinary melting pot of different cultures and backgrounds. The details included are fantastic my favourite being that the characters speak both a mix of English but also Chinese (usually when swearing).

I also love each and everyone one of the characters. Captain Mal Reynolds is the lead, a war veteran with a hard exterior but a soft inside which he tries to keep hidden from the world; Jayne Cobb the ruthless mercenary who is in it from the money; Zoe the warrir women and Mal's second in command; Her husband Wash the pilot and comedian of the ship; Kaylee the girly mechanic who sees the best in everyone; Inara the 'companion' who brings class and respectability to the ship; Shephard Book the preacher with a mysterious past and finally Simon and River Tam who are wealthy upper class geniuses on the run from the authorities. The mix of characters is both brilliant as each bring their own separate qualities to the story but they also compliment and mix together well to tell a brilliant story.

For me the real tragedy with Firefly is the fact that it didn't go on for longer. The series was cut short by the network who didn't follow the ideas of Joss Whedon to allow viewers to settle into the series slowly with the original pilot but insisted on the second episode being shown as the pilot which confused everyone at the time. As you watch it you see so many plot line emerging and ideas thrown out there which you just know would have been epic. Serentiy goes some way to address these ideas but there is so much more that could be told and done with these characters.

So to cut a long story short go and buy this series. It is on Amazon for less than £12 and will be the best thing you watched this year.

Sarah said…
You're determined to make me buy a DVD player aren't you lol. I've heard a lot of good things about this series so I'm sure I'll get around to watching it eventually :o)
29 November 2011 at 13:06

Amberdenise said…
Firefly is one of my FAVORITE tv shows! It's always wonderful to find a fellow Browncoat!
29 November 2011 at 22:35

Chrystal said…
I have read so many comments about this show, I just might need to go and buy it then! :) I do love me some Joss Whedon so I'm in. I'm adding it to my wishlist now. :)

Nikki - Notes of Life said…
I'm with you on this one! I LOVE Firefly and only wish there could have been more than one season.
3 December 2011 at 21:02