November 05, 2011
Today I am thrilled to have author Sall Gardner guest posting on Bookcase Showcase ....

Unfortunately all my books are in storage due to the fact I’m moving. They’ve been in storage for a while and I miss them dearly. I’ve done my best to recreate the books that inspired the Double Shadow here – by sneaking into Foyles and looking slightly crazy constructing a personal bookshelf. Some photos here are taken in the general sections I researched, but are not exact portrayals of all the books I read. 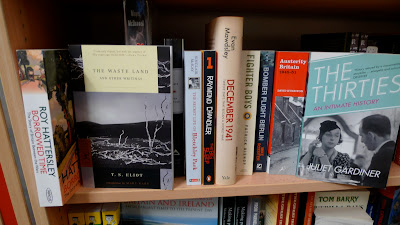 Juliet Gardiner’s the 1930s is a wonderful book, it was published mid way through the writing of mine and it became a bible for everything I needed to know – she captures the atmosphere and the time beautifully. I got in touch with her for my research and she was kind enough to help. I wanted to know about cinema and picture houses, and get a general expert view on the 1930s. 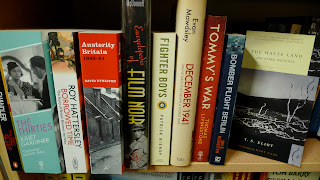 The Wasteland: I never went to university, I went to art college and spent 15 years in theatre. I always had the idea that TS Eliot would be beyond me because he’s so revered by the academics – but then I heard Ted Hughes’ reading of The Watsteland which was the most extraordinary piece – it’s like music. The poem was published in 1922 along with Joyces’ Ulysses, and these two books became the washing line that the 20th century novel hung upon. The poem’s fragmentation was how I began to see the memory machine – fragments of memories, the piecing together of the past, what really did happen and how we rewrite memory. In The Double Shadow there is a wasteland where the picture palace stands – it’s a moveable feast  – a sea with images that rush in upon it and out of it. It affects the main characters lost there.The poem is perhaps the main inspiration for the interior of the machine. I highly recommend downloading the The Wasteland app too. 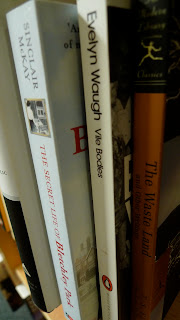 Evelyn Waugh was great writer, with an eye like the lens of a camera through which he captured society. An outsider, his pictures are taken from a distances – beautifully observed and incredibly witty – encompassing the decandance of the 1920s and 30s in England. With that book has to go Fitzgerald’s The Great Gatsby and Nancy Mitford’s Love in a Cold Climate. I love The Great Gatbsy and I’ve read it about 5 or 6 times throughout my life - each time I’ve found it more and more sinister. In a way it prophesies the Second World War, as do Waugh and Mitford. 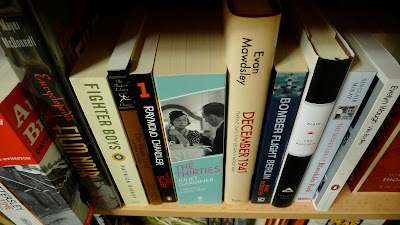 I became very interested in Socrates. His general gist of an argument is that we negate memory by writing things down. He believed that the man of the future would lose much of his memory because of this. Although Socrates didn’t know then about machines or what was to come, in a way his predictions were right – we lose our memories by relying on computers/iPads/Google Maps – we do not keep the information in our brains. This is what interested me in the idea of the green light in the memory machine. We’ve allowed ourselves to be dumbed down by technology – lots of us are sitting in the corner watching the hum of the green light. 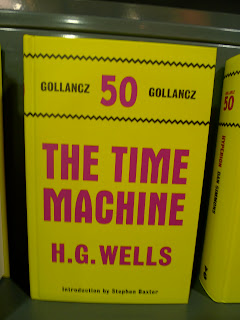 HG Wells’ The Time Machine is a great adventure story. I read this a long time ago and revisited it for research. Wells explores the science of his time machine in great detail. I decided not to do the same – rather let it be more of an enigma...

Michelle Fluttering Butterflies said…
Oh fantastic, I love that you did this in Foyles, what must they have thought of you?!

Great books though and it was really interesting reading about them..
19 November 2011 at 09:47