November 22, 2011
Behemoth by Scott Westerfeld
Published by Simon and Schuster
Series: Leviathan #2
Source: Purchased for myself 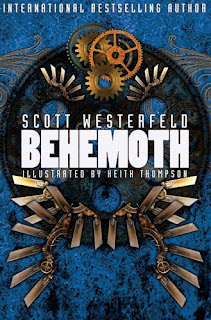 The behemoth is the fiercest creature in the British navy. It can swallow enemy battleships with one bite. The Darwinists will need it, now that they are at war with the Clanker powers.
Deryn is a girl posing as a boy in the British Air Service, and Alek is the heir to an empire posing as a commoner. Finally together aboard the airship Leviathan, they hope to bring the war to a halt. But when disaster strikes the Leviathan's peacekeeping mission, they find themselves alone and hunted in enemy territory.
Alek and Deryn will need great skill, new allies, and brave hearts to face what's ahead.


I loved Leviathan being a fan of Steam Punk and a history geek and was so excited to get round to reading Behemoth. I am pleased to say that I was not disappointed and enjoyed it as much as Leviathan and am equally excited about getting started on the final book in the series.

The thing I loved about these books is the characterisation of the two main characters Alek and Deryn and the contrast between the two. I love both of them separately and also love the relationship built up between the unlikely pair.

I love the world Alek and Deryn live in. There are many parts which you recognise from history which excited the history geek in me. I often found myself looking up people and places and events elsewhere whilst I was reading it to find out a bit more about the main events and what in fact did actually happen. I also love all the steam punk elements and the combinations and contrast between the world of the Darwinists and Clankers. I particularly love all the Beasties particularly gorgeous little Bovril.

The main storyline in this instalment was fast paced and engaging keeping me wanting to read more and more to find out what was going to happen. I also really enjoyed the scenes with the rebel groups and thought there were some brilliantly funny scenes which I loved reading. I loved the pictures that appeared alongside the story and really felt they added to the story.

A fantastic instalment in the series which I enjoyed. I am looking forward to reading Goliath very soon and finding out how everything finishes.

Jan von Harz said…
I have yet to read Levithan, but have it on my shelf at school and the kids love it. I am sure when I get around to it I will too. Good to know the the second book is also awesome so I will have to purchase it for myself and my students. Great review!
22 November 2011 at 13:34

Michelle Fluttering Butterflies said…
I really loved the first book in the series, but I haven't yet gotten around to this one :( I want to though, and soon!
23 November 2011 at 08:17