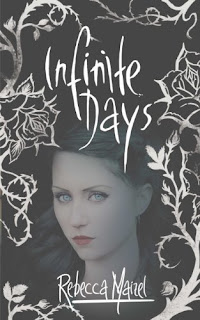 "Throughout all my histories, I found no one I loved more than you...no one."
Those were some of Rhode's last words to me. The last time he would pronounce his love. The last time I would see his face.

It was the first time in 592 years I could take a breath. Lay in the sun. Taste. Rhode sacrificed himself so I, Lenah Beaudonte, could be human again. So I could stop the blood lust.


***
Infinite days was an awesome read and a welcome relief in a market inundated with Vampire Novels as it featured scary real vampires who wouldn't think twice before ripping your throat out rather than the cuddly variety we all seem to be reading about all the time at the moment.

For me this book had several things I loved about it

I loved seeing how Lenah adjusted from being Vampire back to being a human. Seeing the way in which she viewed both the world as it was but also how she compared it to the world from her time (e.g. 500 years previous) was absolutely fascinating to me.

I loved the scenes in the book where you flashback to different parts of Lenah's past as and when it ties in with the current storyline. I loved seeing where she had come from and difference between the Lenah of now and the Vampire Queen she used to be.

As I said in the start I loved that this books was about Vampires which were actually evil and quite happy to kill people at random. I loved seeing how evil Lenah's coven were and what lengths they were quite happy to go to get their own way.

The book has two distinct parts. The first section is all about getting to know Lenah and her new life which was interesting throughout albeit slow paced. The final third however is when things really kick off and the pace of the story changes completely after the vampire coven finally catch up with now human Lenah. This section was brilliantly engaging as you were left on the edge of your seat wondering what was going to happen to Lenah.

The end of the book left me stunned and while it is open for a sequel I don't have any idea how or where it would go which is quite exciting. Looking forward to it already.

Marathon said…
Oh, I'm so glad to see another person who liked it so much! YAY.

Ynysawdre Elderly Residents Association said…
I have this on my shelf and your review is making me itch to read it :D
7 November 2011 at 16:23

Michelle Fluttering Butterflies said…
Huh. I bought this book in hardback when it first came out and then I read a whole bunch of mixed reviews of it and it has since sat there collecting dust. I think I really needed to read a positive review of it to get back some of my excitement for reading it. So thank you.
19 November 2011 at 09:48