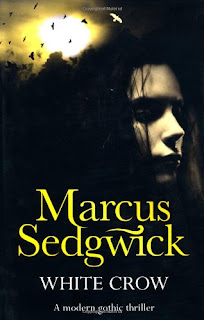 It's summer. Rebecca is an unwilling visitor to Winterfold - taken from the buzz of London and her friends and what she thinks is the start of a promising romance. Ferelith already lives in Winterfold - it's a place that doesn't like to let you go, and she knows it inside out - the beach, the crumbling cliff paths, the village streets, the woods, the deserted churches and ruined graveyards, year by year being swallowed by the sea. Against her better judgement, Rebecca and Ferelith become friends, and during that long, hot, claustrophobic summer they discover more about each other and about Winterfold than either of them really want to, uncovering frightening secrets that would be best left long forgotten.

Interwoven with Rebecca and Ferelith's stories is that of the seventeenth century Rector and Dr Barrieux, master of Winterfold Hall, whose bizarre and bloody experiments into the after-life might make angels weep, and the devil crow.


***
I found White Crow to be a brilliantly creepy and fast paced read which I really enjoyed.

The thing I loved the most about this book was the characterisation. I thought the contrast between the two main girls was brilliant and I loved seeing how their strange little friendship developed and twisted and turned as the story progressed. I also though it was very clever how the author switched between the two girls and their opposing points of views on thes story.

I also loved how the author alternated the present day story with short chapters from the past. I thought this really added to the story and gave it that bit more background wise to make for a fuller story.

I don't think I can even put into words in a way that will do justice to the story about how cleverly put together it is and how fantastically creepy it is. Definitely one to read with the light on especially as you get closer and closer to the end. I actually don't think I was fully prepared for how down right creepy it would actually be.

All in all an excellent book the quality of which was just as you expect from such a proficient author as Marcus Sedgewick.

serendipity_viv said…
I really really loved this book! It is just so dark and the ending was so unexpected.
26 July 2011 at 11:47