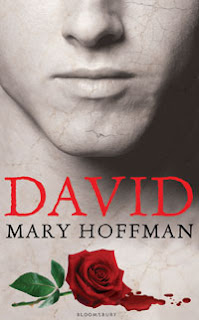 5. Why Florence?
This is an easy question to answer! I fell in love with the city when I was twenty, in my first “long vacation” from studying English Literature at Cambridge. I had the chance to go to Florence for a month and learn Italian at the British Institute. Classes were only in the morning, so I had the rest of the day and weekends to explore the city. And that meant finding out about art.
I had taken A level art, though I didn’t get a brilliant result. I’m no artist but I do have a strong visual sense and when people say they can “see” my scenes and characters I think that must be because I can too. I actually visualise the scenes being enacted by my cast of people in the settings I’ve imagined for them. And I honestly think that’s something I learned from looking at great art.
During that first month in Florence I was soaking it all up like blotting paper – the Uffizi, the Pitti Place, the Accademia, the Bargello, the Medici Chapels and the Duomo. The Duomo! You can see it from all over the city, glimpsed down side roads or spotted looming above lesser buildings; the Duomo, with its magnificent cupola designed by Brunelleschi, is the beneficent spirit of Florence, forever associated with it. Cupola and campanile, I climbed them both – something I can’t do any more, now that I have such bad vertigo. But I could then and the views from the top made every step worth it.
Had I seen any of Michelangelo’s work in reproduction before I went to Florence? Probably, even though that was before the Internet and search engines. But seeing it all there in the place where much of it was made was what made me a lifelong fan. Of his sculptures, I mean, not his paintings. No, the painting that won my heart was Simone Martini’s elegant golden Annunciation in the Uffizi. That led to a lifetime’s admiration for that painter’s work – and he got put in a book, too: The Falconer’s Knot.
So, I discovered the frescoes of Fra Angelico at San Marco and those of Masaccio across the river at Santa Maria del Carmine, the amazing statues of Donatello and Benozzo Gozzoli’s jewel-like chapel at the Medici Palace, the Boboli Gardens, the stalls on the Ponte Vecchio and the street market at San Lorenzo. Quite a bit of the city was dirty and polluted in those days and the river Arno a murky brown colour but I loved every bit of it.
It was a terrible culture shock coming back to England and trying to explain to others what I had experienced. Imagine coming back to a land where Walls vanilla was the standard ice-cream when you had sampled the delights of Perché Non? (Why Not?), a Gelateria with more flavours than you could remember – including tomato! Only it was like that about everything.
I can’t remember now how long it took me to go back to Florence after that first trip but I do know that I have now lost count of all the times I’ve visited it. I have favourite places and works of art that I have to go back to every time, and every time it’s like coming home. As I make my way from Santa Maria Novella station to wherever I’m staying – usually near Santa Croce of late – that first glimpse of Brunelleschi’s Dome puts a stupid grin on my face that doesn’t disappear until it’s time to leave again.
I’ve written about a fictionalised version of Florence in a parallel universe in Stravaganza: City of Flowers, which takes place in Giglia, the most important city in Talia. But with David, I had the chance to try to recreate the real place, in that exciting few years when Michelangelo was sculpting David and Leonardo painting the Mona Lisa.
I loved doing it and I’ll be back, both in fiction and real life. I simply can’t stay away from Florence for long. 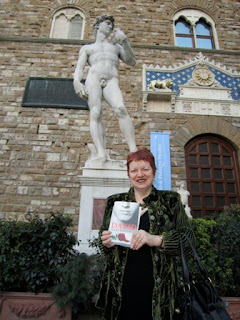 Karen C said…
I just finished reading David a couple of days ago and it really made me want to visit Florence.
10 July 2011 at 12:42

Michelle Fluttering Butterflies said…
Mary talks so passionately about art and Florence that it makes me itchy to go there as well!
18 July 2011 at 09:29