Review: Shadows on the Moon by Zoe Marriot 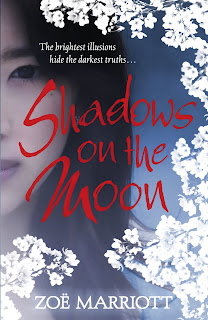 "On my fourteenth birthday when the sakura was in full bloom, the men came to kill us. We saw them come, Aimi and me. We were excited, because we did not know how to be frightened. We had never seen soldiers before."

Suzume is a shadow-weaver. She can create mantles of darkness and light, walk unseen in the middle of the day, change her face. She can be anyone she wants to be. Except herself.

Suzume died officially the day the Prince's men accused her father of treason. Now even she is no longer sure of her true identity.
Is she the girl of noble birth living under the tyranny of her mother’s new husband, Lord Terayama? A lowly drudge scraping a living in the ashes of Terayama’s kitchens? Or Yue, the most beautiful courtesan in the Moonlit Lands?

Everyone knows Yue is destined to capture the heart of a prince. Only she knows that she is determined to use his power to destroy Terayama.

And nothing will stop her. Not even love.


***
Shadows on the moon is a beautifully woven tale which I thought was a wonderfully written with a real "fairy tale" like feel to it. I enjoyed every page and didn't want it to end.

Shadows on the moon has been described as Cinderella meet memoirs of a Geisha and I really think that is a brilliant comparison to start with. I loved the orientalness (not sure that is a word but hey!) of the book and loved pretty much everything thing that came along with that orientalness like the setting, the culture, the outfits and the whole world built up around the characters

I loved the main character Suzume and her outlook on her world. As a character I found her brilliantly easy to relate to and was desperately keen to champion her cause (not that she needs championing as she does very well on her own two feet thank you very much). I liked the added dimension that her abilities added to her and enjoyed seeing how she grew into them as the story progressed.

Another thing I really enjoyed about the book was the whole fairytale-esque feel to it. It had the same qualities of all those fairy tales you loved as a child but with the added bonus that the main girly character had an edge to her and wasn't about to lay down and wait for her prince to rescue her.

I actually also liked that the book was historical fiction and gave you a real feel of the time and place it was set in but didn't over burden you with tiny details which can make some historical fiction hard going to read. I really think (which my history teacher head on) this is the way to engross your audience and get them interested in any given historical period rather than over doing it and making them switch off.

The story itself I really enjoyed. I won't begin to go into detail for fear of spoiling parts or not being able to do it justice but I will say that it continually kept me guessing throughout and I loved all the twists and turns it continued to throw at me all the way up until the very last page. Certainly a book that kept me wanting to read more and more to the point where I struggled to put it down.

All in all I can honestly say that Shadows on the moon is a fantastic offering from Zoe Marriot, with an awesome main character, a captivating plotline and a wonderful fairytale like feel to it. Definitely a book a will be recommending whole heartedly to others.

Raimy from Readaraptor Hatchling said…
Great review! I LOVED this book so so much! I couldnt put it down and devoured it over two days! :D Glad you enjoyed it too!
8 July 2011 at 20:24