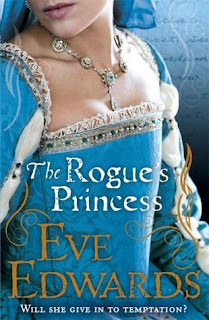 1586 – London, England. Sixteen-year-old Mercy Hart is the daughter of one of London’s richest – and strictest – cloth merchants. Kit Turner is an actor and the illegitimate son of the late Earl of Dorset. A chance encounter finds Kit falling for the beautiful Mercy’s charms, but their love is forbidden. A merchant’s daughter and a vagabond – it simply cannot be. If Mercy chooses Kit she must renounce her family name and leave her home. Will she favour duty over true love, or will she give Kit his heart’s desire?


***
The Rogue's Princess is the latest in Eve Edward's Tudor series. Each book focuses on a different brother of Lacey family, this one in particular focusing on the illegitimate half brother Kit Turner.

I am pleased to say that this instalment is as good as the other two in the series and I already have a new Lacey brother to swoon over in Kit. He is just as gorgeous as the brothers in the previous two books so be prepared to fall in love all over again. The main storyline follows Kit as he tries to woo Mercy, a young lady he met at a dinner and plays with the idea of forbidden love as her father does all he can to prevent the couple from being together.

What I love about this series is the characterisation. It is done brilliantly making the whole host of characters easily to relate to even though they act and behave in a way that is fitting for the time period they are in. I love how you get a real sense of period whilst reading them without feeling like the history is being rammed down your throat. The dialogue is witty and clever throughout.

The star of this piece without a doubt is Kit. Kit's story is very different from that of the other Lacey brothers. As he was illegitimate he had a very different background to his brothers and his life since then is also very different. He is a player who spends his evenings making audiences fall in love with him and is in all intents and purposes a bit of a Jack the Lad until he meets Mercy whom he falls for instantly and wishes to marry. Mercy father who is a Puritan has other ideas however. I loved following Kit's attempts to both win Mercy won (which was easy) and then her father (which was not). I loved seeing how their relationship develops over the book and seeing how far both of them would go to have the other in their lives.

Those of you who enjoyed the first two books will be pleased to know that the characters you loved in the earlier books all have cameos throughout the story, a feature which I really loved.

All in all this book is a prime example of how historical fiction should be done. Fun, fast paced and witty which excellent characters you can relate to instantly.