I am looking forward to this book loads - it looked amazing when I first saw it ages ago on www.thestorysiren.com and I have been waiting for it ever since. 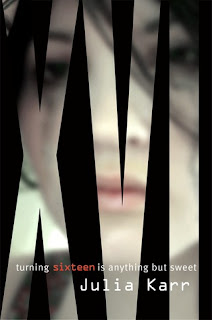 In the year 2150, being a girl isn’t necessarily a good thing, especially when your sixteenth (read sex-teenth) birthday is fast approaching. That in itself would be enough to make anyone more than a little nuts, what with the tattoo and all – but Nina Oberon’s life has taken a definite turn for the worse. Her mother is brutally stabbed and left for dead. Before dying, she entrusts a secret book to Nina, telling her to deliver it to Nina's father. But, first Nina has to find him; since for fifteen years he's been officially dead. Complications arise when she rescues Sal, a mysterious, and ultra hot guy. He seems to like Nina, but also seems to know more about her father than he’s letting on. Then there’s that murderous ex-government agent who’s stalking her, and just happens to be her little sister’s dad."

Samantha (A Dream of Books) said…
Sorry, don't know what happened with my first post. Oops! I saw Kristi talking about this book too and I promptly added it to my wishlist. It sounds amazing!
17 November 2010 at 18:41