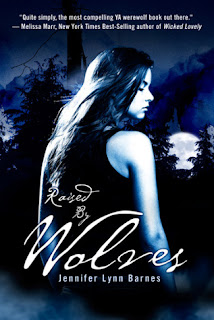 Adopted by the Alpha of a werewolf pack after a rogue wolf brutally killed her parents right before her eyes, fifteen-year-old Bryn knows only pack life, and the rigid social hierarchy that controls it. That doesn't mean that she's averse to breaking a rule or two.

But when her curiosity gets the better of her and she discovers Chase, a new teen locked in a cage in her guardian's basement, and witnesses him turn into a wolf before her eyes, the horrific memories of her parents' murders return. Bryn becomes obsessed with getting her questions answered, and Chase is the only one who can provide the information she needs.

But in her drive to find the truth, will Bryn push too far beyond the constraints of the pack, forcing her to leave behind her friends, her family, and the identity that she's shaped?


***
I did enjoy this book in the end and I am looking forward to the sequel but boy did I struggle with it initially.

Raised by wolves is very different to all the other werewolf story I have read. The ideas are original which was nice for a change and the characters were well written. I enjoyed the fact that the lead was a feisty female but I really didn't warm to her all that much. I liked a lot of the secondary characters like Ali, Lake and Devon but there was just something about Bryn I didn't get.

The story starts off quite slow and I found it quite confusing to begin with. The dialogue flips between what is happening and being said out loud here and now to conversations being said between the wolves minds and to action happening in a dream like state. This for me was the thing I really didn't get about the book the most and I often found it hard to keep up with what was actually going on. It did improve as the book went on but initially I was thrown.

All of the action happens in the last third of the book and I for one enjoyed the story once it got going, I just wish it had got there sooner. The final ending was good and it has set up what could potentially be an awesome series.

Not the best book I have read this year, but certainly engaging with a unique premise and witty characters with lots of potential to be a good series overall.


A huge thanks to Lyndsey http://yafiction-heavenhellandpurgatory.blogspot.com/  and Quercus for sending me a signed copy. You guys rock!

Karen C said…
I'm glad I read your post as I've just bought this book. Its good to know in advance that the first part of the book might be slow so I will need to keep reading, reading, reading.
8 November 2010 at 10:27

Unknown said…
The cover of this book is haunting and looks good. Thanks for the honest review. If I were to ever read this in the future I will remember to just stick with it until the end...:)
8 November 2010 at 15:49

Caroline said…
I actually really liked this book, but I can see how you would find the first part a bit slow...
And I loved Bryn :)
It definitely has some great potential for a series and Lake was my favourite character!
Great review Kirsty!
8 November 2010 at 18:33