Review: The Mockingbirds by Daisy Whitney 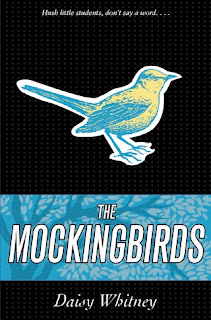 Some schools have honor codes.
Others have handbooks.
Themis Academy has the Mockingbirds.

Themis Academy is a quiet boarding school with an exceptional student body that the administration trusts to always behave the honorable way--the Themis Way. So when Alex is date raped during her junior year, she has two options: stay silent and hope someone helps her, or enlist the Mockingbirds--a secret society of students dedicated to righting the wrongs of their fellow peers.

In this honest, page-turning account of a teen girl's struggle to stand up for herself, debut author Daisy Whitney reminds readers that if you love something or someone--especially yourself--you fight for it.


***
I read this book in one sitting and thoroughly enjoyed it. A brave take on a hard hitting subject which was executed beautifully. I would highly recommend it to all.

To begin with I didn't quite get Alex and what had happened to her and I think to myself a couple of times "what is the big deal" and "get over yourself". That said I warmed to her as the book progressed and as the story went on you start to feel for her more and more as more of her story comes out. I've read quite a nasty review of this and I think that might have been where the reader goes wrong as they said they only read the first few chapters.

This book deals with the issue of date rape quite bravely and has a unique idea to help the main character to deal with her problems. The whole story centers around the idea of consent and the fact that that no response doesn't imply a "yes". I was fascinated by this idea as it is so obvious but I imagine it is the type of excuse used but a variety of people in a variety of different circumstances to get away with whatever they like.

The story had a whole host of characters who were pretty cool. Alex herself was interesting and I loved her friends, TS and Maia and her sister Casey. Casey is an interesting character in that she set up the Mockingbirds and I loved finding out her reasons for doing so as the book unfolded. I also loved Martin (he is so cute) and was rooting for him throughout.

The whole premise of the Mockingbirds was fascinating. I was somewhat disturbed by the school system where the system does not deal with pupil behaviour but once I got past that the idea seemed ingenious in that it gave the culprit of a given crime their just deserves and made them accountable for what they had done (Thinking about this now reminds me of the end scene of cruel intentions - fab film). I like how they started subtly by removing privileges the pupil should have earned before openly bringing them to trial and then justice.

The only little criticism I have is that I expected the Mockingbirds to be a bit more sinister from the way the blurb read which they weren't so I spent the entire book waiting for something creepy or nasty to happen to Carter which it didn't.

All in all an awesome book which is well worth the read.

Anonymous said…
I enjoyed this book, as well, and I'm hoping that the concept of "only yes means yes" will catch on in discussions. I, too, thought the Mockingbirds were going to be a little more evil, but overall I'm glad they didn't turn out that way. Great review!
16 November 2010 at 00:17

Nic @ Irresistible Reads said…
Wonderful review. Everybody seems to be lovin this book. I am ordering it as a Christmas present to myself. I like the messages that it sends :)
16 November 2010 at 00:43

Mel said…
Really thoughtful review - I didn't really know much before. Thanks!

Michelle Fluttering Butterflies said…
What a great review. I'm quite desperate to read it now :)
16 November 2010 at 21:13

Samantha (A Dream of Books) said…
I enjoyed reading your review of this title. I've heard a lot about it lately. It sounds like a difficult subject has been approached and written about in a very sensitive way.
17 November 2010 at 18:44