Review: The Foreshadowing by Marcus Sedgwick 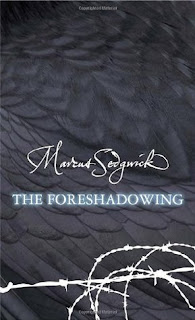 It is 1915 and the First World War has only just begun.

17 year old Sasha is a well-to-do, sheltered-English girl. Just as her brother Thomas longs to be a doctor, she wants to nurse, yet girls of her class don't do that kind of work. But as the war begins and the hospitals fill with young soldiers, she gets a chance to help. But working in the hospital confirms what Sasha has suspected--she can see when someone is going to die. Her premonitions show her the brutal horrors on the battlefields of the Somme, and the faces of the soldiers who will die. And one of them is her brother Thomas.

Pretending to be a real nurse, Sasha goes behind the front lines searching for Thomas, risking her own life as she races to find him, and somehow prevent his death.

In all honesty if you want a book about the horrors of the trenches, the impact of world war one on people left behind or the role of nurses in the war the are far better books out there to read. However despite this statement I do think this book is worth a read.

For me the magic in this book isn't the story as such, although it is engaging enough, it is in the beautifully unique writing style of Marcus Sedgwick. I don't think there are any other authors out there that I can compare his work too. There's just something about it which is so simple yet so poetic which evokes such a Gothic feeling for the reader and a real sense of the characters and events that it raises the hairs on the back of your neck.

There's nothing quite like a Marcus Sedgwick that's for sure.

Michelle Fluttering Butterflies said…
Marcus Sedgwick is just one of those authors who I feel like I should read more of!
14 November 2012 at 12:32