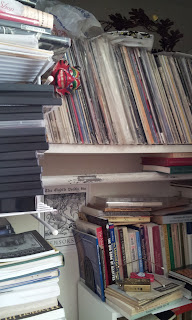 Because I'm living a bit of a gypsy life, I offer up some shelves from my office which -- cough -- also shows the signs of my itinerant existence, still being in the midst of unpacking all the things that had to be packed away while the office was given over to a replacement while I was off in Ireland for a year. Without meaning to do so I seem to accumulate tchotchkes of various kinds: medieval stuff, female action figures, pirate thingees. There's the viking my dad carved for me, the Cthulhu my pal Jan Kozlowski made and the sock zombie my pal Mildred gave me. Oh, and the nun doll Alice Loweecey made for her mystery series! I have mostly medieval books here. There's the Anglo-Saxon and medieval women shelf then the Old Norse and Chaucer and oversize shelf. Because our offices are in converted houses, I also make use of the closets in my office. My vinyl collection has found a home here on the way to being discarded (cough, five years it's been there...) and some of the teaching DVDs and oh yeah, the devil puppet maraca. 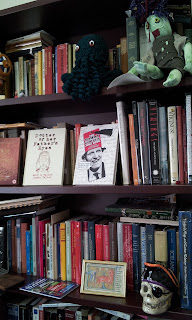 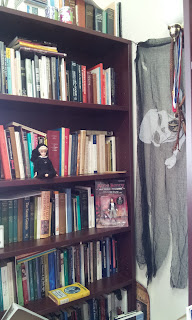 My office is a little oasis. People always come in it the first time, look around with surprise and usually say, 'wow, you have a nice office' or 'I must alert the authorities' or something like that. I have a lot of theatre posters and lobby cards as well as favourite art, degrees and posters that encourage me to get work done, i.e. Mark E. Smith shouting 'Stop mithering!' or the wonderful poster for Jim Jarmusch's Dead Man. Johnny Depp plays William Blake. He's only pointing the gun at me if I have the door closed. The three Ms: motivation, motivation, motivation. I try to get work done in my office. It doesn't always happen, but if it does I have plenty of books on hand to help, including something like sixteen copies of Beowulf. 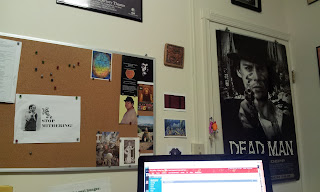