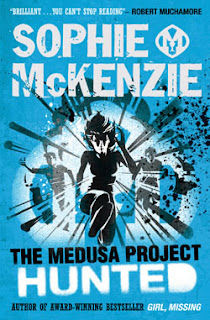 Dylan, the daughter of the scientist who created the Medusa gene for psychic powers, has never felt she really fits into the crime-fighting Medusa Project. But then she makes a discovery about her father's death which changes everything. As she and the other Medusa teens search for the truth, Dylan meets Harry - a boy who seems to know more about Dylan's past than she does. But can Dylan trust him? While Dylan searches for the mysterious legacy that her father has left her from beyond the grave, her dad's killer closes in. But just how far is the murderer prepared to go to keep Dylan from finding out the truth?

Hunted is another cracking instalment in the Medusa Project series.

I loved to have a book in this series from Dylan's point of view because I have found her to be a bit of a mystery over the series. She is standoffish and keeps herself separate from the rest of the group and I enjoyed having the chance to see the world from her perspective.

This instalment was just as fast paced and exciting as previous instalment with loads of twists thrown in which keep you guessing from the first page until the last. As the book goes on you get the chance to find out even more about the project and all the different people involved and all the things that happened in the past that the group is slowly starting to find out. The revelations they find are stunning and throw a whole new perspective on everything the group thought they knew up until this point.

I can't tell you too much about the twists that are thrown in this time as it will spoil the book for you but be rest assured that they are brilliantly done.

A fab instalment in an enjoyable series. I'm looking forward to the next instalment already.