Well I wasn’t quite sure where to start with this as, from what I can see here at the overflowing library, one glance at my bookshelves would not necessarily mark me out as much of a bookworm. I certainly don’t own several of those lovely Billy Bookcases and while they are overflowing in part, that’s not entirely for the normal reasons. So behold, the first of them, the main bookcase in the front room. 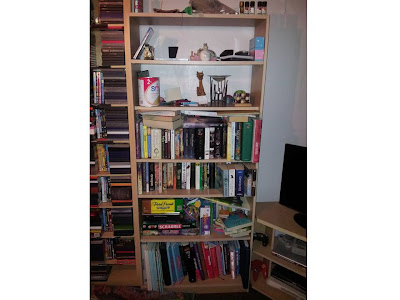 I know, right? It looks like there’s a lot of empty space, but that really could not be further from the truth. You see, this is the bookshelf of a parent with young children, hence the thick board-books at the bottom that after the thousandth time we’ve given up on tidying properly, while the top three shelves are home to things expensive, fragile or potentially dangerous. Between those though this shelf is home to our almost-complete collection of Terry Pratchett novels, assorted historical fiction belonging to my wife and a great deal of horror, assorted fantasy and autobiographical gangster tales by the likes of Chopper Read, along with cook books and music related stuff on the bottom. Please don’t be alarmed by the juxtaposition of the gangster novels, cooks books and that thick tome on the bottom entitled “knots and ropework” if you can see it in the picture. They are all mine, but their presence is entirely unrelated. Honestly.
Aside from Pratchett there isn’t much in the way of a grouping by a particular author here, as this is less than half of our book collection with many more still being in storage owing to the need to find room for the children. I attempted to argue there was plenty of room in the garden, but apparently children are an indoor breed. Go figure.
In essence though, this is virtually all genre fiction. I simply don’t have much of an interest in literary fiction and while some might scoff at that, there are simply so many books out there I want to read that I don’t feel I’m missing out by ignoring the next “modern classic” or anything from the Booker Prize nominations list. Each to their own of course, but personally I’ll take Orcs, vampires and all manner of escapist fantasy any day of the week. 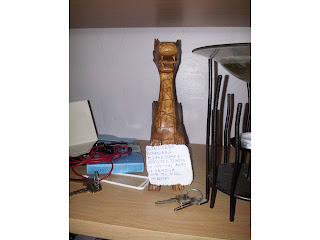 Have to give a special mention here to Nigel, the Hoardless Dragon. Bless him. A present from my wife and very much the life and soul of our bookshelf, reminding us that when people make creatures who breath fire out of flammable materials, there’s really no point in taking life too seriously. 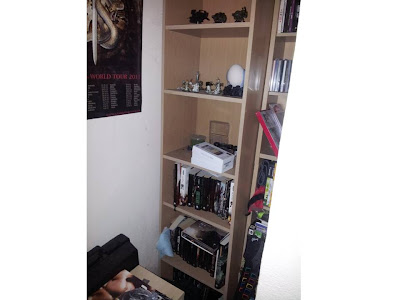 And this one? This is where all of the military science fiction is kept, which is a great love of mine. Almost everything here is set within Games Workshop’s intellectual property setting and it has been a vast source of inspiration and drive for me over the last few years, eventually culminating in my decision to take this writing lark seriously and get some words published. Now military stuff might not be everyone’s cup of tea, but when you write anything with combat in it it’s useful to see how many ways you can actually describe one person hitting/kicking/shooting/stabbing/blowing up another. Aside from the prose there are also several role-playing rulebooks, which really are a fascinating source of information for any writer and I’d urge you to take a look for one good reason: character profiles. Of course these are weighted towards combat stuff in some cases, but as a template for creating a dense, nuanced character with their own world, culture, mind, abilities and attributes, they are essentially an idiot’s guide to character creation.

Not much more to go on about than that, so I hope you’ve enjoyed my showcase. It was a lot of fun writing it!

Alecmcquay.wordpress.com is my blog, I’m @vampiricchicken on Twitter and easily found on FaceBook thanks to a name that has largely died out in the British isles.