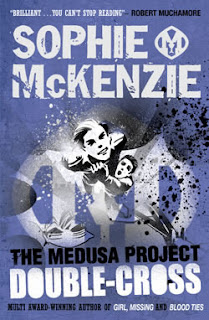 Narrated by Nico, Double-Cross is full of telekinetic action as the Medusa Project team arrive in Sydney, Australia, for another exciting mission - and unexpectedly come face-to-face with two more Medusa teens: Cal, a boy who can fly, and Amy, a girl who can shapeshift... but who is double-crossing who? And how many others are out there carrying the Medusa gene?

Double cross is the 5th instalment in the medusa Project series. I've really been enjoying them and think they just keep getting stronger.

I won't say too much as I could so easily spoil the book for someone. I will say that there are loads of twists and turns and revelations thrown in which are brilliantly unexpected and exciting and much as been set up for the last book. I literally cannot wait to see when the series finally ends up in the next and final instalment. I particularly enjoyed the addition of Cal to the story.

Roll on the final book!