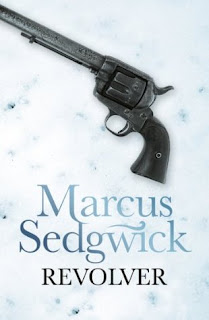 1910. A cabin north of the Arctic Circle. Fifteen-year-old Sig Andersson is alone. Alone, except for the corpse of his father, who died earlier that day after falling through a weak spot on the ice-covered lake. His sister, Anna, and step-mother, Nadya, have gone to the local town for help. Then comes a knock at the door. It's a man, the flash of a revolver's butt at his hip, and a mean glare in his eyes. Sig has never seen him before but Wolff claims to have unfinished business with his father. As Sig gradually learns the awful truth about Wolff's connection to his father, Sig finds his thoughts drawn to a certain box hidden on a shelf in the storeroom, in which lies his father's prized possession - a revolver. When Anna returns alone, and Wolff begins to close in, Sigs choice is pulled into sharp focus. Should he use the gun, or not?

This book is a prime example of what makes Marcus Sedgwick a brilliant author.

Revolver is a thriller set in the Arctic circle with a small cast of six characters and starts with the death of the father of the family the story is about. Shortly after the father dies a man arrives at the family's remote home and everything suddenly becomes much complicated for the children to deal with as the man accuses the father of something the children haven't got a clue about and starts threatening them. As the story evolves secrets emerge which are devastating.

For me this relatively short novel really packs a punch. Not a word is wasted in the brilliant writing style and through it you really gets a sense of atmosphere and feel of what life is really like for the family faced with the strange man and his revolver. The book also features a series of chapters which are flashbacks to the past which help to give brilliant insight into the present story. I really enjoyed these chapters and loved how they added to the story.

A brilliant book which is a perfect example of everything that makes a Marcus Sedgwick novel a joy to read.

maryom said…
Sounds good. I'm slowly reading my way through all Sedgwick's work so I must add this to the list.
27 November 2012 at 09:44

Hollie said…
I've only read one book by Sedgwick, but I adored his writing style. I'll have to check this one out, because it sounds brilliant! Great review! :)
27 November 2012 at 20:08

Anonymous said…
Hosting
Appears to be excellent. I'm gradually studying my way through all Sedgwick's perform so I must add this to the record.
28 November 2012 at 16:29