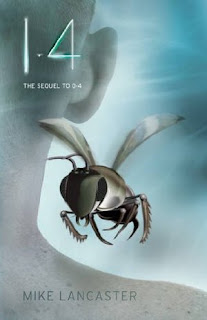 Thousands of years in the future the divide between humanity and technology has become nearly unrecognizable. Each thought, each action is logged, coded, backed up. Data is as easily exchanged through the fiber-optic-like cables that extend from fingertips as it might be through ordinary conversation. It's a brave new world: A world that the Straker Tapes say is a result of many human "upgrades." But no one is sure whether the Straker Tapes are a work of fiction or an eerie peek into an unimaginable past.
Nearly sixteen-year-old Peter Vincent has been raised to believe that everything that the backward Strakerites cling to is insane--an utter waste of time and potential. Since his father is David Vincent, genius inventor of the artificial bees that saved the world's crops and prevented massive famine, how could Peter believe anything else?

But when Peter meets Alpha, a Strakerite his own age, suddenly the theories about society-upgrades don't sound quite so crazy, especially when she shows him evidence that another upgrade is imminent. And worse, there may be a conspiracy by the leaders of the establishment to cover it up. A conspiracy spearheaded by Peter's own father.

Gripping and full of unexpected twists, 1.4  takes the unsettling questions raised in 0.4, and flips them entirely. What if we knew that the very way we live was about to be changed in an instant, and we could stop it? And what if everything we are sure we know is entirely wrong?

1.4 is the second book is the 0.4 series. It is a sequel in that both books are set in the same world and they are based about the same ideas about the human race but they is a millennium's time difference between the two and therefore a cast of new characters and could easily be read as a standalone. While I didn't enjoy it as much as 0.4 it was a nice add on to book one and left me thinking in the same way the first book did.

In the world of 1.4 the story of Kyle Stracher is a mere myth. Many people believe in the tapes made by the boy a thousand years ago whilst other dismiss it as rubbish. The world has developed along with the development of technology. People live in towns which are the clones of other towns and spent much of their time online to connect with others, shop and learn about whatever they need to. Peter lives in this world with his scientist father who detests the stacherites and someone just doesn't add up for Peter and he is determined to find out what it is.

I won't tell you too much about what happens in the book because quite honestly I can't begin t do it justice. The ideas are clever and give the reader an awful lot to think about. I like how the story is told through transcripts and really enjoyed finding out more about Peter and the world he lives in. The revelations are exciting and clever.

While not as good as book one certainly a book I enjoyed with clever ideas leaving you much to think about.

Anonymous said…
Hosting
I believe it is vital that a lot extra individuals know about this. Keep up working with the excellent composing.