Review: The Returners by Gemma Malley 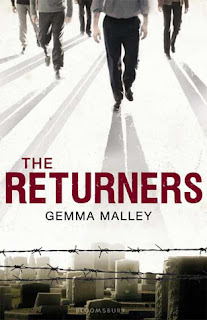 London teenager Will Hodge is miserable. His mother is dead, his father's political leanings have grown radical, and his friends barely talk to him. To top it off, he's having nightmares about things like concentration camps. Then Will notices he's being followed by a group of people who claim to know him from another time in history. It turns out they are Returners, reincarnated people who carry with them the memory of atrocities they have witnessed in the past. Will realizes that he, too, is a Returner. But something about his memories is different, and with dawning horror, Will suspects that he wasn't just a witness to the events, he was instrumental in making them happen. Set in the near future, with the world on the verge of a new wave of ethnic cleansing, Will must choose to confront the cruelty he's known in his past lives, or be doomed to repeat it…

I was very keen to get my hands on a copy of this book after loving Gemma Malley's The Declaration. I must say while it was as well thought out and clever I really didn't engage with it as much as I would hope.

The returners is set in the near future. The recession is hitting hard and the extreme political parties on the far right are getting more of a voice with their racist views about immigrants as the population struggle to find work and want someone to blame. This means people living in England who aren't white are often targeted and subject to prejudice and discrimination both from ordinary people and from the authorities.

The story that then follows gets more into the revelations they tell him and are really clever in the way they work. They gave me a lot to think about and were totally unexpected.

All in all while it wasn't the book I expected it certainly was a thinker.