November 24, 2012
Chaos and order battle it out on the bookshelves in my house.  There are six of us – me, my partner and our four children – and we’re always swapping books with each other, and borrowing them or lending them to other people, so there’s a lot of movement, and plenty of interlopers.  And I find it almost impossible to get rid of books. What follows then is a snapshot of some of the shelves this week, starting at the bottom and working up to the top of our Victorian terrace in south London.

Last month we did some filming here for the enhanced iBook edition of A World Between Us, (link: https://itunes.apple.com/gb/book/world-between-us-multi-touch/id576421338?mt=11&ign-mpt=uo%3D4 ) so I got together as much of my Spanish Civil War research as I still could lay my hands on.  Poetry books nestle alongside technical weaponry manuals and CDs as they did in my research.  (I nearly always had a song in my head when I was writing.) By shifting a lamp and various bits of children’s pottery, I managed to colonise a whole new shelf.  Shhh!  I’ll keep those books there until somebody notices.

Since then a few more have arrived: my stepfather gave me a novel called The Adventurers by Margot Heinemann (link: http://www.spartacus.schoolnet.co.uk/SPheinemann.htm), to whom the beautiful poem at the beginning of A World Between Us is addressed. 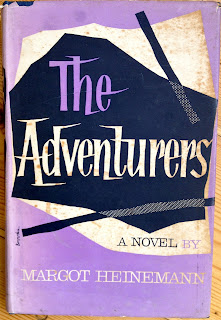 And I picked up In Time of Trouble by Claude Cockburn just a few weeks ago: he covered the Spanish Civil War for the Communist newspaper The Daily Worker (now The Morning Star) and joined the Republican army himself so he could report through a soldier’s eyes. 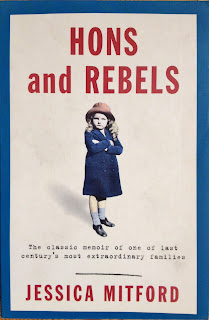 Jessica Mitford’s Hons and Rebels set off my fascination with the war when I was a teenager myself, and made running away to Spain seem the most romantic thing in the world to me. 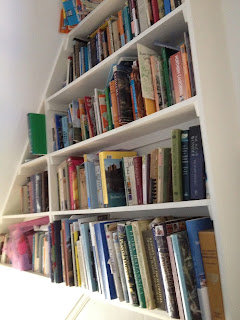 We’ve managed to squeeze another bookcase onto the stairs on the way up to the tiny study, supposedly for gardening and travel books.  As usual though, intruders of all kinds have sneaked in. Now that I can’t travel that much, just the sight of old guide books brings back lovely memories of places I’ve been in the past.  At the top, just out of sight, there are lots and lots of maps. 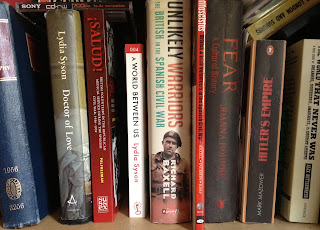 There’s always a little row of books at the back of my desk in my tiny study on the first half-landing – whatever I’ve been referring to recently.  I’ve just written a conference paper proposal about Dr James Graham, the eighteenth-century sex therapist who invented an electrical, magnetic and musical bed to help couples conceive perfect babies, so my biography Doctor of Love is there right now, alongside some recent Spanish Civil War publications – like Richard Baxell’s brilliant Unlikely Warriors where you can find out all about the real people who went to Spain.  Spot the clues to my next book here and elsewhere… 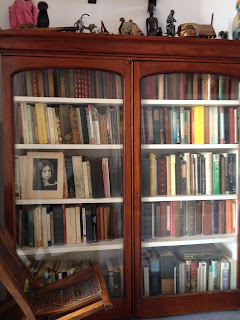 Poetry on the next landing…. 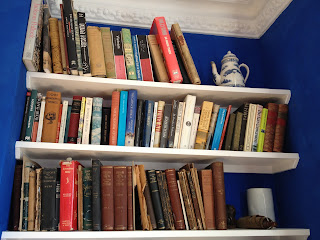 What’s this?  Some of my Timbuktu collection, some books by two of my great-grandfathers, and look – there’s ‘The Russian Century’, an extraordinary photographic history which I’ve been trying to find for my daughter for months.  Why didn’t I look up there? 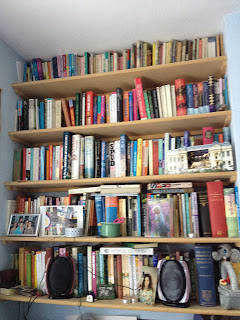 This has gone out of focus, just as I do when I enter the chaos of my teenage daughter’s room, but lots of the books on her shelves are my old books, or ones we’ve read together.  We have a mother-and-daughter book group to thank for introducing us to the brilliant ‘Spud’ books. 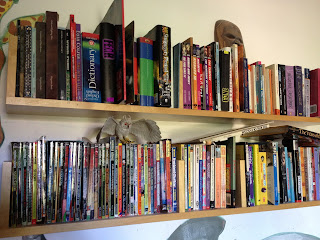 This is already history, as we’ve just redecorated my oldest son’s room, and these books are now heaped up and down the stairs waiting to be sorted.  His early obsessions have certainly fed mine – I wouldn’t be writing the book I am now, were it not for one of them – but his Horrible History days are now long gone... 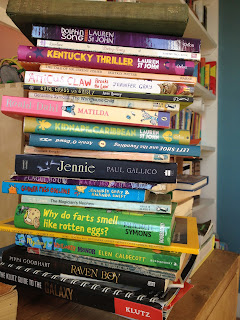 We left ‘paperback fiction, a-o’ in our twins’ room when we moved into a loft conversion above, emptying just the lower part of an entire wall of shelves.  But that's now overflowing uncontrollably with their books so this room is reaching book crisis stage. Here's a typical pile:  a library book or two, a few of my own childhood favourites which the boys are now enjoying (Geraldine Symons, Elizabeth Enright, James Thurber, Arthur Ransome), some of their own ‘nostalgia’ reading (there’s a good reason to hang on to children's books forever) and a couple of new books the boys have seen and commented on from early drafts thanks to my writing group – Atticus Claw and Guinea Pigs Online.  Other recent productions from our group, Keren David's Another Life, and Becky Jones' Bumper Book of London, are probably beside someone else's bed right now. 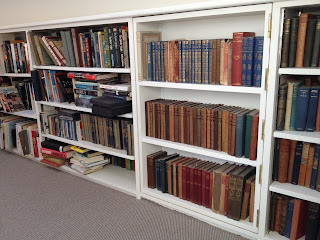 And finally, my favourite bookshelf of all, which I designed myself, fulfilling a lifetime’s ambition in the process… It runs under the sloping ceiling of my bedroom. (I tend to do nitty-gritty writing in bed, where I also read to my twins most nights, tucked up with one on either side.) Most of the books here are already in double layers, books just read, waiting to be read, half-read all shelved higgledy-pickledy in front of ‘paperback fiction p-z’.  But one section is too shallow for that.  Yes, you’ve probably spotted those hinges.  It’s a door into the eaves.  The perfect size for the Kipling, Hardy and Conrad collections gathered together over years by my father, this bookcase/door gives me a little thrill every time I open it.  And now my secret is out.  One of them, anyway.

It seems like Bingo!!!!! It took me a few several weeks looking for this information but I'm thankful I came here because it's just the right place for me.

Ruby // Rustled Pages said…
Hiya, I've been admiring your blog for ages but have never actually commented on it (!). I basically wanted to say how much I LOVE your blog and how you are NEVER allowed to stop blogging! Nice post by the way :P Have a good day!
~Ruby at http://feedmebooksnow.blogspot.co.uk
25 November 2012 at 15:58

Anonymous said…
Hosting
I just could not leave your website before indicating that I incredibly experienced the regular details a person provide to your visitors? Is going to be again consistently to be able to examine up on new posts