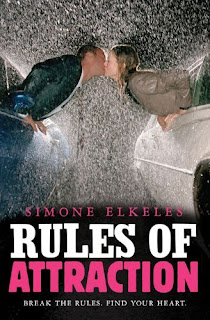 When Carlos Fuentes returns to America after living in Mexico for a year, he doesn’t want any part of the life his older brother, Alex, has laid out for him at a high school in Colorado . Carlos likes living his life on the edge and wants to carve his own path—just like Alex did. Then he meets Kiara Westford. She doesn’t talk much and is completely intimidated by Carlos’ wild ways. As they get to know one another, Carlos assumes Kiara thinks she’s too good for him, and refuses to admit that she might be getting to him. But he soon realizes that being himself is exactly what Kiara needs right now


***
Rules of Attraction is the second book in the perfect chemistry series which focuses on the second brother Carlos. I loved the first book in the series but absolutely adored this instalment.

From the outset Carlos is very bit the bad boy with attitude. He is angry at the world having been sent to live with his brother in America which he is not in the least bit happy about. He arrives at a new school and settled in way he knows how by partying hard with the cool kids. Within the first few days of enrolling the school is raided for drugs. Before he knows it Carlos is moved into Kiara's home to live with her family and made to join REACH a program for delinquent youths.

The plot of this book is the same as book one, Bad Boy falls for Good Girl and in this sense the book is entirely predictable, there is even a cheesy epilogue at the end but nevertheless I loved it and devoured every page greedily.

I loved Kiara as a main character and thought she was the perfect heroine. She's clever without being a nerd, loves and helps out her family without being a good-two-shoes, has a gay best friend, runs and hikes mountains and knows how to fix cars. All these things rolled into together make her such a cool character. Although to start with Carlos doesn't think so.

By the end of the book I was totally sold on Kiara and Carlos being together and I loved how the story went by the very end. A fantastic read with lots of hot and sexy tension which kept me hanging on every word waiting to see what happened next.
conclusion

Selina said…
I love this series and "Rules of Attraction" is definitely my favorite of the three books. Great review!
25 October 2011 at 10:04

Michelle Fluttering Butterflies said…
There is something rather cheesy about this series, but I still enjoy them. And I definitely prefer Carlos and Kiara to the last two. (Alex and .. somebody?)
1 November 2011 at 13:20