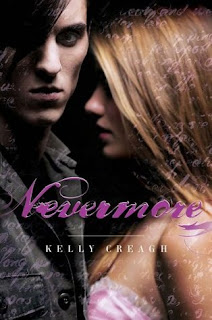 Cheerleader Isobel Lanley is horrified when she is paired with Varen Nethers for an English project, which is due—so unfair—on the day of the rival game. Cold and aloof, sardonic and sharp-tongued, Varen makes it clear he’d rather not have anything to do with her either. But when Isobel discovers strange writing in his journal, she can’t help but give this enigmatic boy with the piercing eyes another look.

Soon, Isobel finds herself making excuses to be with Varen. Steadily pulled away from her friends and her possessive boyfriend, Isobel ventures deeper and deeper into the dream world Varen has created through the pages of his notebook, a realm where the terrifying stories of Edgar Allan Poe come to life.

As her world begins to unravel around her, Isobel discovers that dreams, like words, hold more power than she ever imagined, and that the most frightening realities are those of the mind. Now she must find a way to reach Varen before he is consumed by the shadows of his own nightmares.


***
I have had Nevermore on my shelves for a while and have been put off starting it because of its size, at over 500 page it is a bit of a beast, but I really shouldn't have worried as I whizzed through it in the space of a few hours.

Isobel and Varen are an unlikely couple, forced to spend time together when they are made to do a joint project on the work of Edgar Allen Poe. While you can tell from the outset they are going to get together it's hard to see how at first. However as the book develops you find yourself routing for them more and more, hoping that they'll sort it all out against the odds. Their relationship isn't the usual lovey dovey romance, it's haunting and dark and built up in the creepiest backdrop you'd ever care to imagine which is what makes it uniquely different from other paranormal romances I have read of late.

Isobel on the surface is one of those girl, the one you hated at school for appearing to have it all. It's not until she starts to lose that perfect life, the friends, the cute boyfriend and such like that I started to warm to her especially when you start to see how toxic her friends actually are. I tolerated them up to the scene in the icecream parlour but after that I hated every single one of them. I was also very very annoyed with Isobel's Dad who seemed to have his own personal love affair going on with Brad and treated him like a God even though he'd treated his own daughter like rubbish.

From this point on Isobel became more interesting for me. She meet Gwen (I loved that girl entirely) and starts to delve deeper into Varen's world and finally starts to be pulled into his dream world, facing the very danger that Poe faced himself. These sections of the book were very creepy and I often was left not quite sure what was going on as reality and dream world started to overlap. As the book went on the setting and the events became more and more creepy and in some places quite disturbing.

By the end of the book I was left on a complete cliff hanger desperate to know where the story goes from here. I can't wait for the next instalment!

Essjay said…
I loved this book too - I can't wait for the next one. I agree that towards the end there's a terrific blurring of reality and fantasy. Great review.
24 October 2011 at 12:58

Jen (Makeshift Bookmark) said…
So glad you enjoyed this. It's one of my favorite book from 2010 and cannot believe we have to wait so LONG for a sequel!! :(

Sarah said…
I'm curious about this one but I'm just not sure how I'd get on with it, I can't stand reading about that kind of character & I'm not sure if I'd get far enough to see the changes in her. I may give it a go one day though, perhaps I should wait until the sequel is out though just in case lol
24 October 2011 at 23:27

Michelle Fluttering Butterflies said…
I recently read this as well, but didn't quite get on with it. I think I'd definitely like to read more about goth boys though (I liked Varen's lip ring!)
1 November 2011 at 12:57