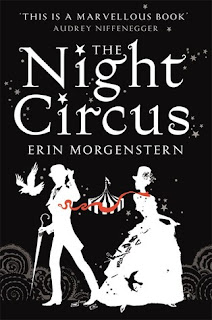 The circus arrives without warning. No announcements precede it. It is simply there, when yesterday it was not. Within the black-and-white striped canvas tents is an utterly unique experience full of breathtaking amazements. It is called Le Cirque des Rêves, and it is only open at night. But behind the scenes, a fierce competition is underway—a duel between two young magicians, Celia and Marco, who have been trained since childhood expressly for this purpose by their mercurial instructors. Unbeknownst to them, this is a game in which only one can be left standing, and the circus is but the stage for a remarkable battle of imagination and will. Despite themselves, however, Celia and Marco tumble headfirst into love—a deep, magical love that makes the lights flicker and the room grow warm whenever they so much as brush hands.
True love or not, the game must play out, and the fates of everyone involved, from the cast of extraordinary circus per­formers to the patrons, hang in the balance, suspended as precariously as the daring acrobats overhead.

The Night Circus is a uniquely different read which conjures up a world you can get lost in.

The Night circus is one of those books that isn't afraid to take its own sweet time when it come to developing the story line and I spent a great deal of time wondering what was actually going on and where on earth was the story going to go.

The writing style used on this book is very descriptive, slowly building up for the reader the world of the Night Circus and giving you a real insight into the magical world of the circus.

I enjoyed following a variety of the characters, my favourite being the twins Poppet and Widget and their friend Bailey. In the end I loved how their story was played out the most.

One thing I did struggle with when it came to this book was how the chapters weren't always in chronological order but rather flitted backwards and forwards which meant at times I was left confused about how everything slotted together.

For me I found the final ending a bit lacking. I had high hopes for something spectacular to happen and it just didn't which did leave me a little bit disappointed as I had invested the time to read the book.

So all in all for me this book didn't meet all the hype surrounding it but I certainly did enjoy it still and enjoyed particularly the fact that it was a unique read with ideas of its own.

Michelle Fluttering Butterflies said…
Sounds like you were pretty disappointed with it. I however am still excited to read this one :)