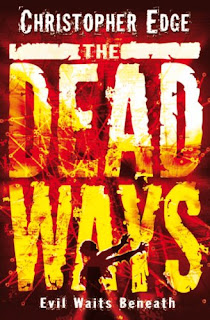 I started The Dead Ways a little bit apprehensively as I am not the type of person that usually enjoys zombie books. There has been so many Zombie titles dropping through my door of late that I have quite honestly got fed up with them. However in this case I was pleasantly surprised and pleased that I decided to give this one a go as it is very different from other Zombie novels I have had come my way.

The book itself starts with a prologue which goes along at break neck pace and this doesn't let up throughout the entire story making you want to read and read and read until you can read no more. From the outset as a reader you are thrown quite literally into the thick of it alongside the main character Scott and find yourself being dragged along this fast paced and creepy ride.

What I liked about this book was that it wasn't your average zombie story. In much of the book the zombies themselves are just a suggestion or an idea which no one quite believes in but I think this makes them all the more creepier. I also liked that there was some kind of explanation with its own history about where they came froma and how they came into being. I also enjoyed that there was a creepy conspiracy story added in with a super creepy masonic cult thrown in. I actually think those dudes were far more creepy that anything zombieish. I also liked how it was set in a future world which was slighly different from our own albeit in subtle ways and seeing how that world changed the world view of some of the characters from our own.

This book being book one in a series sets up loads of thread that I can't wait to see explored in future books. I am definitely looking forward to seeing how it plays out.

Michelle Fluttering Butterflies said…
So many zombie books.. It's hard to know which ones to pick up and which might be better to avoid. I'd not heard of this one before your review, but it sounds interesting.
6 October 2011 at 10:23

Jan von Harz said…
I am not a huge fan of Zombies either and have only read one that I really enjoyed. I like that you discussed that this one maintains more the idea of zombies and that this in turns makes them more creepy. Also intrigued by the conspiracy aspect. Great review.
6 October 2011 at 10:25

serendipity_viv said…
Ah! Zombies! I am out. Unless it is funny like Kirsty Mckay's one I just can't get into them. I am not a zombie fan. But hope the book sells well.
6 October 2011 at 11:18

Kate @Midnight Book Girl said…
I actually really love Zombies, and the cover of this one is what made me stop scrolling through Google Reader and visit your site. Of course, you have a point, there are so many zombie books out now and it's hard to pick the good from the bad. I don't want to burn out on zombies by reading any that just aren't any good, so it's nice to see that you liked the book despite not being on the Zombie Band Wagon.
6 October 2011 at 12:33

Selina said…
Funny to see the different reactions to zombie fiction. I guess you either hate it or love it.
I have been enjoying it quite a bit and will definitely look for this one when it comes out. Thanks for reviewing!
10 October 2011 at 12:26