My life with books:
This old bookcase came into the family via an elderly friend of my parents. It’s battered and time worn. It shows its scratches proudly and I like that. 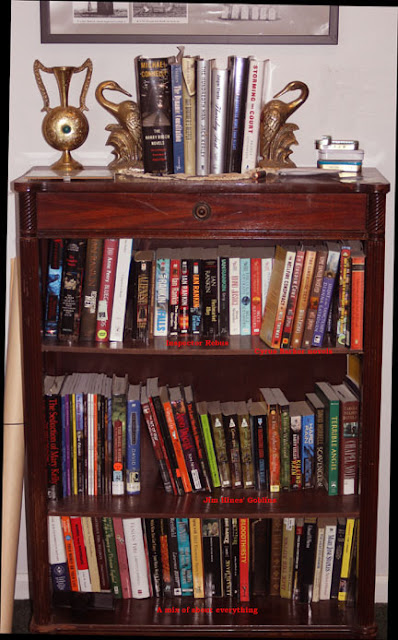 Above the bookcase is a print of Edmund Gorey’s Ghashlycrumb Tinies which depicts the gruesome demises of children from A-Z. It’s very macabre. As in:
A is for Amy who fell down the stairs
B is for Basil assaulted by bears
C is for Clara who wasted away
D is for Desmond who fell out of a sleigh
And so forth. It’s appropriate that the bookcase underneath is filled with Victorian mysteries and the occasional bit of Jack the Ripper fiction. Some of my favorites include The Whitechapel Horrors by Edward B. Hanna (Sherlock Holmes vs. Jack the Ripper) and the works of Will Thomas who writes the always enjoyable Cyrus Barker Series. Not all the books are of the 1900’s however. I have a nice selection of Ian Rankin’s Inspector Rebus novels. Farther down is a bit of fantasy that has escaped the other bookshelf, in this case Jim Hines’ delightful goblin series. I’ve reread these many times because Jig is a most delightful, if myopic, hero.
There is a twin bookcase to this one which is filled with speculative fiction, the “otherworldly” bookshelf. A picture is not included as this is the messiest of the three and it defies my attempts to keep it tidy. I swear the books keep rearranging themselves. No, really. Or at least it seems that way. The bookcase probably needs exorcising if I’d ever get around to it.
I have a weakness for gritty urban fantasies such as those of Jim Butcher (the Harry Dresden Series), Caitlin Kittredge (Black London Series) and Ilona Andrews (the Kate Daniels Series). If my Demon Trappers Series was shelved anywhere it would be in this bookcase. This also holds some of my metaphysical reference books which cover topics such as Magic, Merlin, Druids, Fairies, Vampires and whatnot. Combine those with the urban fantasies and you see why that bookcase is probably haunted. 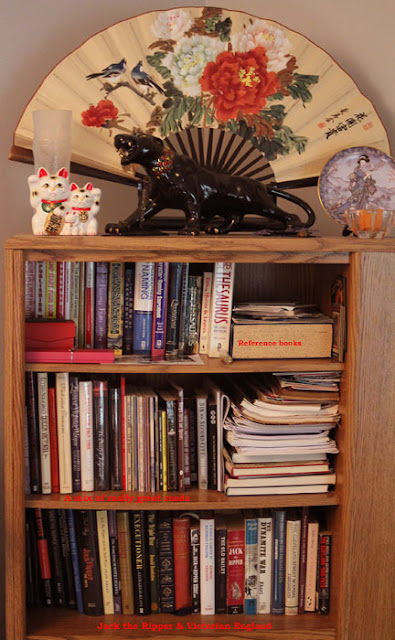 The third bookcase I wish to mention is the one in my office. It was originally a television cabinet and now it serves as a resting place for the majority of my Victorian tomes. Since I own over one hundred books from that era, they’re spread all over creation. The first shelf is the more mundane author-type reference books––a Thesaurus, character naming books, a Really Thick Dictionary and then a smaller one. Neither of which I’ve used for a long time since the invention of online dictionaries. The second row is where things get interesting:
Three books in particular are favorites of mine:
Sin in the Second City (Karen Abbott) –the lives of the Everleigh Sisters who ran a high end brothel in turn-of-the century Chicago
Devil in the White City (Erik Larsen) – an engaging and disturbing account of the construction of the Columbian Exposition (1893 – Chicago) and serial killer H.H. Holmes
The Dreadful Judgment (Neil Hanson) – Not a Victorian era book, but the gripping story of the Great Fire of London in 1666.
There are a couple of Dickens’ reference books there (Dickens Dictionary of London 1888 and Dickens Dictionary of the Thames 1887.) When not penning sprawling stories he made money by cataloging hotels, omnibuses and information about London’s famous waterway. For an author who occasionally writes about Victorian London, these books are pure gold.
The next shelf is the meat of my Victorian reference books and include such things as the transcripts from the trials of Hawley Harvey Crippen (who murdered his wife) and Dr. Neil Cream (an infamous poisoner). There are books on the Fenians (Irish revolutionaries) and many on Jack the Ripper written by some of the top minds in that field (Donald Rumbelow, Stuart Evans, etal.) The shelf below that is more general in nature, covering Victorian customs, forensics of the time period and an excellent volume by Dr. William Fishman about the conditions in the East End of London. 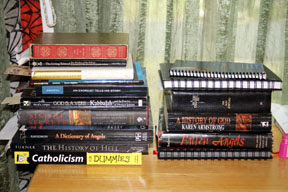 My stack of books for the Demon Trappers Series currently doesn’t have rate its own bookcase as it’s constantly in use. The pile (actually two stacks) consists of such tomes as: Catholicism for Dummies, A Dictionary of Angels, the ever popular History of Hell and various Jewish and Christian scriptures. I even have a book written by one of the Vatican’s exorcists (!).
If you haven’t figured it out yet, I’m a book omnivore. I’ll read almost anything. Which, I suspect, is exactly what every author should do.
Thanks for inviting me to “display my wares” at it were. Clearly I need yet another bookcase.
www.JanaOliver.com
www.DemonTrappers.co.uk
Macmillan Children's Books (U.K. Editions)
Demon Trappers: Forsaken - Jan. 2011
Demon Trappers: Forbidden - Aug. 2011
Demon Trappers: Forgiven – March 2012

Mel said…
I love how beautifully decorated your bookcases are! Mine are always filled with random junk I've left there, but your books and decorations are great! :)
1 October 2011 at 17:14

Jana Oliver said…
I admit that I had to "tidy them up a bit" before they could be photographed. Lots of stray stuff ends up on the shelves over the course of time, unfortunately.
2 October 2011 at 09:49

BookGeek said…
My bookcases are in total disrepair. Most of my books are still in boxes from a move made a few months ago. So sad!

Michelle Fluttering Butterflies said…
I love diverse bookshelves like these :) Also? I think it'd be awesome to read a book by one of the Vatican's exorcists..
6 October 2011 at 10:19

Jana Oliver said…
@ Clover - the Vatican's exorcist's book is pretty serious reading. He gets into all the ways you can determine if someone is possessed by demons, etc. Heavy duty. But worthwhile reading for someone (like me) who writes about Hell and demons.
16 October 2011 at 14:23