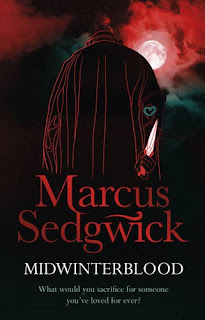 Have you ever had the feeling that you've lived another life? Been somewhere that has felt totally familiar, even though you've never been there before, or felt that you know someone well, even though you are meeting them for the first time? It happens. In 2073 on the remote and secretive island of Blessed, where rumour has it that no one ages and no children are born, a visiting journalist, Eric Seven, and a young local woman known as Merle are ritually slain. Their deaths echo a moment ten centuries before, when, in the dark of the moon, a king was slain, tragically torn from his queen. Their souls search to be reunited, and as mother and son, artist and child, forbidden lovers, victims of a vampire they come close to finding what they've lost. In a novel comprising seven parts, each influenced by a moon - the flower moon, the harvest moon, the hunter's moon, the blood moon - this is the story of Eric and Merle whose souls have been searching for each other since their untimely parting. Beautifully imagined, intricately and cleverly structured, this is a heart-wrenching and breathtaking love story with the hallmark Sedgwick gothic touches of atmosphere, blood-spilling and sacrifice.


***
Midwinterblood is everything I have come to expect from a Marcus Sedgwick book. It's creepy, clever and keeps with you long after you finish reading it. Oh and you need to read every page before the whole thing finally clicks into place and fully makes sense.

The book is told in sections, each section going back in time from the one before it. I found this way of story telling to be really unusual and a clever way of telling a story. Getting the little snippets throughout time meant you started to get an overview and started to see a pattern of the story as a whole.

There is a main story that runs through the whole book which you start to find more and more out about as the story unfolds itself as you delve deeper into the history of the downright sinister island where it is set.

It's hard to say exactly what this book is about without giving too much away about the plot line. Needless to say the story itself twists in turns in way I never saw coming and the storyline is so interesting that it kept me reading page after page. It plays with the ideas of past lives and what a person is willing to sacrifice for someone they love.

Another awesome offering which encompasses everything I have come to expect from a Marcus Sedgwick and well worth a look.