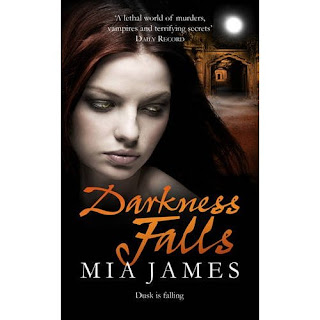 Highgate When April's family moved to the sleepy North London village of Highgate, everyone told her it was the start of an amazing new life. They didn't know the half of it. Weeks later, her father was the latest in a series of brutal killings, someone has tried to kill her, and now her boyfriend, Gabriel, is dying too . . . Murder April couldn't save her father, but there's just a chance she can save Gabriel. There's an ancient recipe, hidden in a forbidden book, which holds the cure. All April has to do is find it. Somehow. Vampires But she has to keep a low profile. In a school full of vampires, where one of their own has been killed, they're beginning to suspect they have a Fury in their midst. April's blood might be deadly to vampires, but even that won't save her if they figure out who she is. Time is short, the stakes are high, and surviving school has never been so tough . .


***
I enjoyed the first book in this series and am always a bit hesitant when starting the second book in a series as often they don't quite meet the expectations I've built up in my head for how the story is going to go. I am pleased to say in this case I think I enjoyed book 2 even more and am once again left on tender hooks waiting to see what happens next.

I liked how this book did all of the things I liked in book 1 just as well. I loved the dynamic between April and her friends. I loved the feel of the places and the way the story is told to make you guess and keep you guessing throughout. What I really loved that was in addition to this the book took the storyline and developed it even further and more involved making it more and more interesting.

As I said the plot line thickens throughout the course of the book as April delves deeper into the vampire world and starts to learn more about her role as Fury. I loved seeing how she dealt with all these different things being thrown at her and I love her as a character s she is both kick ass at times and such a teenager at others. There are plenty of plot twists and revelations which I never saw coming and I love it when a book can catch me unawares like that.

Don't get me wrong there are parts of this series which I am a little dubious about. There are similarities between this book and other vampire books in the genre but I do like that it is a British offering.

I am very much looking forward to the final book in the series and am not sure whether I'll be able to stand the wait. An awesome series that I would genuinely recommend to others.

Samantha (A Dream of Books) said…
I'm actually reading and enjoying 'By Midnight' at the moment but I have this one lined up to read next. Glad to hear you enjoyed it!
4 October 2011 at 18:54

Michelle Fluttering Butterflies said…
Better than the first book? That's great. I started it the other day, but for some reason, prologues really just put me off. I never got past that, but I really should try again..
6 October 2011 at 10:21