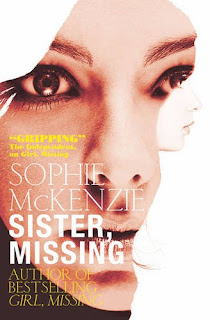 I was a huge fan of Girl Missing and was very very excited to hear that there was another book in the series. I am pleased to say I enjoyed this instalment just as much as it was just as entertaining including all of the things I have come to expect from Sophie's novels: Fast pace, engaging story line, likable characters and loads of twists and turns to make for a thrilling read.

Sister missing follows a similar format as Girl Missing but goes off in its own direction which makes it different in its own right. Lauren is spending her holidays with her American family at a seaside resort in the UK. She takes her 8 year old sister to the beach and whilst there her sister is kidnapped in circumstances similar to her own abduction.

The story which follows is a fast paced rides with several twists and turns thrown in to take the story off in directions you didn't quite see coming. My favourite part had to be when Shelby and Lauren finally talked which is something they hadn't really done up until that point. I thought it was a really sad and poignant bit in the book.

Can I also say that the cover of this one (even though it doesn't match my first book in the series grrr) is awesome and the design is really clever and it still playing with my head even now as I look at it.

All in all a book I really enjoyed and one that her fans will love as much as Girl Missing. Every bit the thrilling rollercoaster ride.

serendipity_viv said…
I finished my copy last night and I was worried it might be too much of the same, but Sophie did not disappoint us.
16 September 2011 at 11:18

Michelle Fluttering Butterflies said…
I'm really looking forward to this one as I really loved Girl, Missing. I haven't read any of Sophie's other books, so excited about them as well.
24 September 2011 at 12:45