Review: Dark inside by Jeyn Roberts 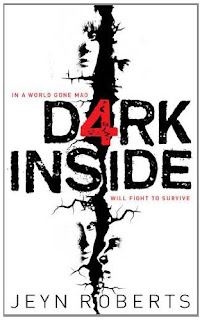 Four teenagers on the same road in a world gone mad. Struggling to survive, clinging on to love and meaning wherever it can be found. THE DARK INSIDE is a stunning, cinematic thriller: 28 DAYS LATER meets THE ROAD.

Since mankind began, civilizations have always fallen: the Romans, the Greeks, the Aztecs…. Now it’s our turn.

Huge earthquakes rock the world. Cities are destroyed. But something even worse is happening. An ancient evil has been unleashed, hooking on to weakness, turning the unwary into hunters, killers, crazies.

Mason: His mother is dying after a terrible car accident. As he endures a last vigil at her hospital bed, his school is bombed and razed to the ground. Everyone he knows is killed.

Aries: A school bus, an aftershock and a crash. Pulled out of the wreckage by a mysterious stranger, she’s about to discover a world changed forever.

Clementine: An emergency meeting at the town hall that descends into murderous chaos. Outside the rest of their community encircle with weapons. How can those you trust turn into savage strangers?

Michael: A brutal road rage incident. When the police arrive on the scene they gun down the guilty and turn on the by-standing crowd. Where do you go for justice when even the lawmakers have turned bad?


***
Dark inside is a harrowing dystopian novel set in the near future. It is fast paced and creepy and one of those books which will continue to play on your mind long after you've finished reading it.

The book starts dramatically switching between four main characters on the day on which the world went crazy. Earthquakes are happening in multiple locations around the world and people are going crazy killing their neighbours, friends and family for no apparent reason. From the outset both the tone and pace of the book are firmly established and there are often passages where I was torn between not knowing whether I could read sections the book because what was happening was so brutal and the need to keep reading because I didn't want to put it down and miss a word of it and I had to know what happened.

The story then skips forward a few months and you start to see what life in like for the survivors of that fateful day. They have been forced to hide out for the majority of the population who seems to have been taken over by a virus which compels them to want to rip "normal" people to shreds. There is no electricity, little running water and finding food and other vital supplies is difficult. They are forced to continually be on the move, outrunning "the baggers" who want to kill them and at times are forced to defend themselves with lethal force.

The story itself is fast paced throughout. As each chapter alternates between the four main characters you get to know more about their hopes and fears for the future and follow them on their terrifying journeys to find somewhere safe not knowing who to trust and what to believe anymore. I liked all of the main characters and liked how the author drew their stories altogether more and more as the book went on.

If you like dystopian YA fiction this is definitely for you, fast paced, edgy and downright creepy with an engaging storyline and interesting characters.

Michelle Fluttering Butterflies said…
I've been hearing lots of interesting things about this one, it sounds pretty good!
8 September 2011 at 13:30

SisterSpooky said…
fab review. it really was an excellent read. have my review up within the next week :)
8 September 2011 at 20:48

Leanna Elle said…
This is one of my favourite reads of the year. Can't wait to see what happens next!
8 September 2011 at 20:53

kaye (paper reader) said…
Whyyyy haven't I heard about this one yet? I absolutely need to read it. This one sounds like it's right up my alley. Thanks so much for the heads up!
9 September 2011 at 03:55