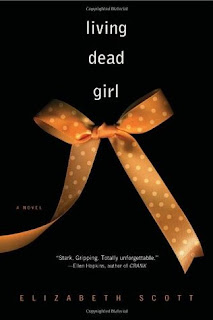 The thing is, you can get used to anything. You think you can't, you want to die, but you don't. You won't. You just are.

This is Alice.
She was taken by Ray five years ago.
She thought she knew how her story would end.
She was wrong.


***
When I first opened this book I really didn't know what to expect from it but I most certainly did not expect the book I then read.

This book pulls no punches and doesn't shy away for one second from the horrors it portrays. The result is that you are left at the end feeling heartbroken for this tragically awful tale which continues to play on your mind long after you put it down.

Living Dead Girl is the tragic tale of a teenager who was kidnapped as a child and forced to live a terrifying life with a man who uses her to serve everything one of his nasty and horrible whims. It makes for uncomfortable reading through and as the story went on I found my heartbreaking just a little bit more for this poor girl who had had everything stolen for her by this horrible man.

I can imagine that this book has picked up a lot of criticism for tackling such a untalked about / unwritten about topic and it is probably argued that the topic is not suitable for teenagers. I would would argue the case that it may be a little too much for younger teenagers I think this book would goes along way to open the eyes of teenagers to the dangerous present in society that they ought to be made aware of.

Kate @Midnight Book Girl said…
I read this book in one sitting while drinking coffee at Barnes and Noble when it first came out. Could not put it down, it might be a tragically unhappy and uncomfortable read, but it's a very compelling tale.
24 September 2011 at 03:05

Hanna @ Booking in Heels said…
Ooh, I've been dying to read this one for ages, but I haven't managed to swap for it yet.

I've heard that it's brutal and doesn't pull any punches. It was in the paper a few days ago that a few school libraries have banned it from their shelves.
26 September 2011 at 14:09