September 01, 2011
Fury by Elizabeth Miles
Published by Simon and Schuster
Challenge: DAC
Source: Passed onto to me by my blogging friend Sarah 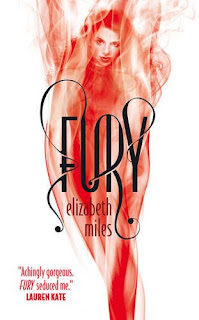 It’s winter break in Ascension, Maine. The snow is falling and everything looks pristine and peaceful. But not all is as it seems...

Between cozy traditions and parties with her friends, Emily loves the holidays. And this year’s even better--the guy she’s been into for months is finally noticing her. But Em knows if she starts things with him, there’s no turning back. Because his girlfriend is Em’s best friend.

On the other side of town, Chase is having problems of his own. The stress of his home life is starting to take its toll, and his social life is unraveling. But that’s nothing compared to what’s really haunting him. Chase has done something cruel...something the perfect guy he pretends to be would never do. And it’s only a matter of time before he’s exposed.

In Ascension, mistakes can be deadly. And three girls—three beautiful, mysterious girls—are here to choose who will pay.

Em and Chase have been chosen.


***
Fury is an interesting read and promises to be an excellent series. This book goes a long way to set up a number of things that could be teased out and used more fully in future books along with setting the scene of what the Furies are about and the type of people they go after. It is fast paced and engaging through out and keeps the reader guessing throughout the book.

The thing that struck me first about this book is that the characters are not all that likable. They've all done things that are not all that nice and to a certain extent as a reader I started off with a slightly twisted satisfaction that they were getting what was coming to them as the Furies started their work.

That said as the book went on and the ways in which the Furies got their revenge became more extreme I found myself ill at ease with what was happening. Had the book been a film there would have been several scenes where I would have been hid behind my pillow not quite wanting to look at what was going on. The author had this terribly clever way of writing where you were torn between not wanting to know what was going to happen next but also needing to know just as badly.

For me the most interesting part of this story was the paranormal element which doesn't really come into play until the very end of the book and I hope this is something that is drawn out more fully in future books as I found myself with lots of questions about why they were doing what they were doing.

All in all an interesting read and a potentially very exciting series for older YA readers.

Jess said…
This sounds like such a great book I really can't wait to read it. I love the sound of the story but am a little concerned about the likability of the characters as that's a big thing for me. Thanks to your review I'll keep that in mind and now go into the book with an open mind.
1 September 2011 at 17:45

Sarah said…
I'm glad you enjoyed this one more than I did Kirsty. I just really struggle with dislikable characters & couldn't have cared less what happened to them all. I do think that the furies were an interesting element & would be curious to see what happens later on in the series though
1 September 2011 at 18:11

Michelle Fluttering Butterflies said…
Sounds really exciting. I think I've been put off by the threat of unlikeable characters, but the story seems like it could be interesting enough that I should try to persevere with that. Maybe.
7 September 2011 at 12:28