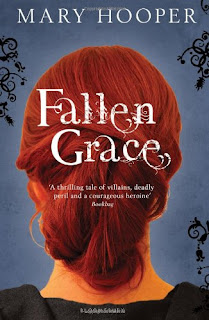 Grace Parkes has just had to do a terrible thing. Having given birth to an illegitimate child, she has travelled to the famed Brookwood Cemetery to place her small infant's body in a rich lady's coffin. Following the advice of a kindly midwife, this is the only way that Grace can think of to give something at least to the little baby who died at birth, and to avoid the ignominy of a pauper's grave. Distraught and weeping, Grace meets two people at the cemetery: Mrs Emmeline Unwin and Mr James Solent. These two characters will have a profound affect upon Grace's life. But Grace doesn't know that yet. For now, she has to suppress her grief and get on with the business of living: scraping together enough pennies selling watercress for rent and food; looking after her older sister, who is incapable of caring for herself; thwarting the manipulative and conscience-free Unwin family, who are as capable of running a lucrative funeral business as they are of defrauding a young woman of her fortune. A stunning evocation of life in Victorian London, with vivid and accurate depictions, ranging from the deprivation that the truly poor suffered to the unthinking luxuries enjoyed by the rich: all bound up with a pacy and thrilling plot, as Grace races to unravel the fraud about to be perpetrated against her and her sister.


***
Mary Hooper is one of those YA historical novelists I have only recently discovered but I am already rapidly falling completely in love with what she writes and only wish I had discovered her work sooner.

Fallen Grace is a beautifully written novel which I devoured in a matter of hours.

The first thing I loved about this book was that each chapter was headed by a little note, be it a quote, business card or an advert which is linked to the story and added to the whole experience of the story. I loved seeing what was going to come up next.

I loved the setting for the story. The book gave the reader a real sense of what it would have been like to be poor living in the middle of London. The sheer detail about the squalid living conditions endured and the differing jobs people had to take on just to survive on a day to day basis was completely fascinating.

I loved everything about Grace, the main character of the book, and instantly felt for her as you saw what she went through on a daily basis to ensure that her sister Lily had everything they needed to exist. From the outset my heart broke a little bit for her when you see what she went through with the loss of her child and as her tale continued I wanted nothing more than to be able to pick her up and take her away from all the hardship she and her sister dealt with.

The story takes a slight twist when you learn that Grace and Lily are being searched for with regards to an inheritance which is due to them which they knew nothing about and end up feeling very angry at the family of undertakers who seem to be helping the girls out but actually are trying to use them to get their hands on the money. The villains of the piece are really underhand (if the book had been a pantomime there would have been hissing every time they entered a scene) and it ends up making you root even more for Grace and Lily and hope even more that they finally get the justice they deserve and receive what is rightfully theirs.

All in all this book is a shining example of good YA fiction. Fast paced, engaging, well researched with intriguing characters and a fascinating storyline. Definitely a book I would recommend highly.

Annette Mills said…
Really enjoyed your review. I've seen this book before, and read good things about it, but I guess I didn't realize it's YA. I just thought it was adult historical fiction. Thanks!
20 September 2011 at 15:02

Raimy from Readaraptor Hatchling said…
I loved this one and I have just read her earlier one, Newes From the Dead... they were both amazing and honestly, I have to say the same, I am rapidly falling for Mary Hoopers books too!
23 September 2011 at 13:59

Michelle Fluttering Butterflies said…
I've had this book on my shelf for AGES now and I really must get around to reading it, especially after reading such positive reviews!
24 September 2011 at 12:47