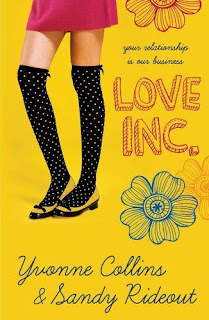 Zahra, Kali, and Syd would never have met if their parents' marriages hadn't fallen apart. But when the three girls collide in group counseling, they discover they have something else in common: they've each been triple-timed by the same nefarious charmer, Eric, aka Rico, aka Rick. Talk about eye-opening therapy.Cheerful, diplomatic Zahra is devastated. Rico had been her rock and sole confidant. How could she have missed the signs? Folksy, flirtatious Kali feels almost as bad. She and Rick had only been on a few dates, but they'd felt so promising. Hardened vintage-vixen Syd is beyond tears. She and Eric had real history... Or so she'd thought. Now all three girls have one mission: to show that cheater the folly of his ways.
Project Payback is such a success, the girls soon have clients lining up for their consulting services. Is your boyfriend acting shady? Dying to know if your crush is into you? Need match-making expertise? Look no further than Love, Inc.


Love Inc is one of those books who girls who love romantic contemporary fiction will devour eagerly and be left wanting more about the three main character and their madcap adventures.

The story revolves around three girls who meet at therapy. They're there because of their divorced or divorcing parents to ensure they don't go off the rails and when they meet they find out they have a whole lot more in common. It turns out they have all been seeing the same boy who has been willingly triple-timing them. Rather than turning against each other they put their heads together and do something together to teach him a lesson.

The stunt they pull becomes infamous and off the back of it the girls form their own business called "Love Inc" set up to help others deal with all their relationship issues both positive and negative.

The beauty of this book is the relationship built up between the three main characters who start as virtual strangers but end up as the best of friends despite the fact they are all totally different personalities. The story managed to be both funny and heartfelt all the way through. The story would also appeal to a a good mix of different girls as the main characters were so diverse.

All in all a really sweet story which is a nice and easy read.