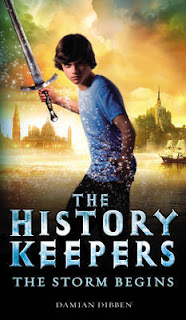 Imagine if you lost your parents - not just in place, but in time. Jake Djones' mum and dad have gone missing and they could be anywhere in the world - at any time in history. Because the Djones family have an astonishing secret, which for years they've managed to keep - even from each other. They belong to the History Keepers: a secret society which travels through the centuries to prevent evil enemies from meddling with History itself. In the quest to find his parents, Jake is whisked from 21st Century London to 19th century France, the headquarters of the mysterious History Keepers, where he discovers the truth about his family's disappearance - and the dastardly Prince Zeldt's plan to destroy the world as we know it..


***
The History Keepers is one of those series which will be loved by both boys and girls alike. It is a roller coaster adventure with a range of brilliant ideas that is going to make for an excellent series as the story goes on.

I love the idea of the History keepers. They are a secret service of agents whose job it is to ensure that villains do not tamper with history and change the course of time for their own gain. The whole idea that this group are out there going back to wherever and whenever in history is one that will appeal broadly and could be used in so many cool ways to make for an interesting read.

This book is predominately used to established the whole History Keepers world. Jake has just been thrust into the History keepers world and his whole world has just been turned upside down having found out that his parents are not the ordinary shopkeepers he thought they were but are actually agents on a mission lost somewhere in time.

Jake is desperate to help to find them and stows away, against orders, on a ship which is sent to find his parents and once discovered is brought onto the team as part of the mission to find his parents. The story from here on out is fast paced and interesting with lots of twists and turns along the way. The whole adventure goes well with Jake proving that he could be a valuable member of the History Keepers and several mysteries are unearthed along the way. The story ends with lots of unanswered questions which leaves the story lines open for book two to continue with.

All in all an interesting read and a series which I am sure is going to be popular with its interesting take on time travel.

Michelle Fluttering Butterflies said…
This one sounds really interesting and I look forward to reading it. Not sure if you meant to say in your first sentence that it is a book for both boys and girls 'alive' !! :)
12 September 2011 at 11:33