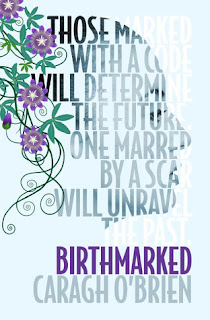 IN THE ENCLAVE, YOUR SCARS SET YOU APART, and the newly born will change the future.
In the future, in a world baked dry by the harsh sun, there are those who live inside the walled Enclave and those, like sixteen-year-old Gaia Stone, who live outside. Following in her mother's footsteps Gaia has become a midwife, delivering babies in the world outside the wall and handing a quota over to be "advanced" into the privileged society of the Enclave. Gaia has always believed this is her duty, until the night her mother and father are arrested by the very people they so loyally serve. Now Gaia is forced to question everything she has been taught, but her choice is simple: enter the world of the Enclave to rescue her parents, or die trying.

Birthmarked is one of those books that I have been waiting to read for a while as the concept is a fascinating one. I have read a lot of dystopian fiction of late but this one definitely stands out as a good one.

Birthmarked is a story based in a future world in which the privileged few live in a walled city and while the majority live in villages surrounding the city. The majority have to provide a quota of babies for the families in the city each and every month in service of the Enclave. This is the role of Gaia a trainee midwife who lives in one of the villages.

The Enclave appears to be this all seeing, all knowing, intolerant and ruthless big brother which rules the lives of everyone with an iron fist. While Gaia is doing her job everything is going on fine but one day she returns to find her mother and father have been taken for being traitors and her world is thrown upside down.

Gaia finds herself the centre of attention, in the middle of something she doesn't quite understand, being interrogated about a code what she knows nothing about. The Enclave has got themselves in trouble. Taking babies from the outside had meant that people didn't know who they were biologically related to meaning they were growing up and having relationships with relations leading to a whole generation with birth defects. This makes anyone who knows in more detail about where the children actually come from very valuable.

What I enjoyed about this book is that it had shades of 1984 in how the society and the authority within it was written mixed in with ideas taken from the Handmaid's Tale. The ideas used were cleverly written and twisted and turned as the story progressed. By the end of the story the pace of the story was break-neck and so engaging that I couldn't put it down as I needed to know what was going to happen next.

All in all a awesome offering in full-to-bursting dystopian market which I thoroughly enjoyed and am looking forward to reading the sequel of.

Amber (Books of Amber) said…
I've been hearing loads of great things about this book. Great review, Kirsty! I bumped this one up on my wishlist, so many people have been giving it glowing reviews.

Karen C said…
I have loads of questions I need answers for about this book. I guess if I asked them it would spoil the book for me lol. Great review!
19 September 2011 at 14:47

Michelle Fluttering Butterflies said…
I really enjoyed this one and I'm really looking forward to seeing where the sequel takes us..
24 September 2011 at 12:46