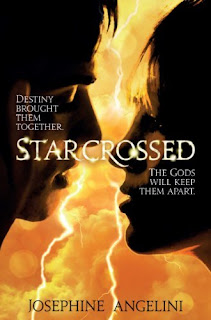 Set on the island of Nantucket, STARCROSSED tells the tale of Helen Hamilton, a young woman whose destiny is forever altered when she meets Lucas Delos and tries to kill him in front of her entire high school. Which is terribly inconvenient, not only because Lucas is the most beautiful boy on the island, but also because Helen is so achingly shy she suffers physical pain whenever she is given too much attention.

Making matters worse, Helen is beginning to suspect she’s going crazy. Whenever she’s near Lucas or any member of his family she sees the ghostly apparitions of three women weeping bloody tears, and suffers the burden of an intense and irrational hate. She soon learns that she and Lucas are destined to play the leading roles in a Greek tragedy that the Three Fates insist on repeating over and over again throughout history. Like her namesake, Helen of Troy, she’s destined to start a war by falling in love. But even though Lucas and Helen can see their own star-crossed destiny, they’re still powerfully attracted to each other. Will they give up their personal happiness for the greater good, or risk it all to be together?


***
Starcrossed is a YA paranormal romance novel, the paranormal twist being that the main characters are all direct descents from Ancients Gods (like Zesus).

I'm not going to lie to start with I relly struggled with this book. The main character royally irritated me for at least a third of the book and I didn't really get the storyline. That said I'm glad I stuck with it because by the end the book turned out to be quite good and has massive potential to be an awesome series.

I loved when the book started to get into the myths and legends of the Greek and Roman gods and how the author tied those into the story.

I loved the boys in this book. They re just a bit too gorgeous and lovely. I also loved Helen's best friend Claire and thought she was generally a bit ace

The action when it finally did kick off was awesome with several twists and turns thrown in.

I can see that this series will be an awesome one if the plotlines the author has started to put into place are picked up and used well. I am quite excited to see where it goes and how they all play out in the next two instalments.

What could have been better ...

Things were dropped into the story for apparently no reason but done in such a way that it was obvious the author was going to do something with them which made it quite easy to predict what was going on.

The main character was highly irritating for a good two thirds of the book. If I had had to read one more time about her cramps I think I would have screamed. I wanted to shake her and tell her to pull herself together more than once.

all in all a series with potential I hope it is awesome.

Thank you Macmillian Children's Books for the review copy

Cory K said…
I need to pick this read up right away! I love Greek mythology. Great review. Don't be a stranger; stop by my blog and say hi! I'm not sure if we're fellow followers, but I follow you!

Michelle Fluttering Butterflies said…
I didn't find it her that irritating and was pulled into this story instantly. Dying to read more in the series :)
6 June 2011 at 10:12

The Fiction Fairy said…
oh man I loved Starcrossed! I did find it a bit predictable, but I still fell for it lol! I have to say though I'm not fond of the cover they used outside the U.S :( Check out my review of it, www.thefictionfairy.com
7 June 2011 at 05:59