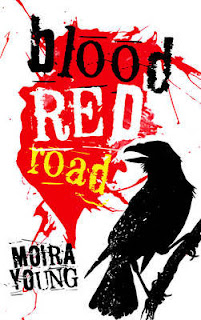 In a lawless future land, where life is cheap and survival is hard, Saba has been brought up in isolated Silverlake. She never sees the dangers of the destructive society outside. When her twin brother is snatched by mysterious black-robed riders, she sets outon an epic quest to rescue him. The story's searing pace, its spare style, the excitement of its fabulously damaged world, its unforgettably vivid characters, its violent action and glorious lovestory make this a truly sensational YA debut novel.


***
Blood Red Road is a YA debut from Moria Young. It is huge at just over 500 pages long and is set to be big this summer based on the amount of attention the publishers are trying to drum up for it in the months building up to its release.

I'm going to be honest. I'm not sure this book entirely did it for me although I did enjoy it enough to get through it (which is no mean feat when you see the sheer size of this beast). When I was reading it felt very much similar in style to Patrick Ness's Walking Chaos series. By this I mean in how the language was used to tell the story, in the feel of the post apocalyptic rough and ready world and in the character of the lead protagonist. That's not to say the stories were in any way similar but I think if you loved that series you'll love this one.

What I liked about it:

The characters were interesting and I like seeing how they interacted with one another. I loved Jack and a character and I started to warm to Saba once she chilled out a bit.

The author clearly has some nice ideas planned out and the story if developed well in future books (I'm assuming this is book one of a series) could potentially quite awesome.

The action when it finally got going was good. The author had no qualms about killing people off which left you guessing and wondering what what happen. I can get frustrated with books where you know that the main characters will be fine not matter what is thrown at them.

What could have been better:

I really struggled with the use of language with this book. Words are written as the character pronounces them and I often found myself having to read much more slowly than I normally do as I was having to translate words to understand what was going on. For me it distracted my attention away from the plot line and made it hard work in places.

It felt to me that there were long gaps between exciting episodes and events which held up the overall story.

The main character annoyed me at times with her stubborn bluntness. I was really glad when she finally started to get over it towards the end of the book.

all in all certainly a series with potential and one I would be interested to see how it plays out.

Mel said…
I can't quite decide if I want to read this or not. However, I did love Choas Walking's play with language so I might give the first few pages a go in the bookstore to make up up mind! Thanks for the honest review! :)
16 June 2011 at 16:29

KelliumSims said…
Great honest review :) I've been in two minds over whether or not I wanted this book - and I still am considering the amount of wholly positive reviews I've seen - so I'm glad I've read something now which isn't completely raving about it
16 June 2011 at 16:59

Gareth said…
Hmm - a big book with a writing style that takes some work... sounds like a big investment in reading time. Still - I'm really enjoying dystopian novels at the moment and it's great when no one is safe. A definite maybe - thanks for the review, Kirsty.
20 June 2011 at 20:01

Michelle Fluttering Butterflies said…
I really hope that I absolutely love this one. The size of it does intimidate me, as does the language.. but I loved the Chaos Walking trilogy so I live in hope!
20 June 2011 at 22:01