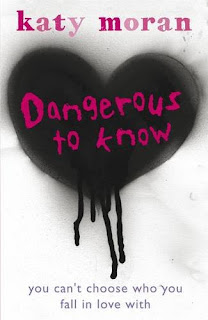 Dangerous to know is a bit of a coming of age story featuring the main character Jack with a romantic starcrossed lovers edge to it.

You first meet the main character Jack as he is off on a train (well hiding in the toilets in the train) with Bethany, a girl he has recently met, on their way to a music festival. they are typical teenagers off to have a good time spending as little as possible. They go off, have a fab time and Jack decides he is falling for Bethany. At the end of the weekend they travel home, part with the promise to see each other later and you get this sense that everything is going to go along nicely.

However everything changes when Jack gets home. Bethany is there with her parents demanding that Jack stay away from her in the future. It is from this point on that the story gets interesting. You start to get a bit more into jack and his background. His family is in turmoil. He hasn't seen his father for years, his older twin brothers are also off the scene and Jack feels alone which is made worse by the fact that he has been told he can no longer see Bethany.

There are several story lines that are developed from here on out. The first surrounds Jack's older brother and what happened to them as it is clear from the outset that whatever happened was all tied in to them getting heavily involved with drugs and gives you good insight into what it must be like to see a family member go down that slippery slope. I loved seeing the relationships the twins had with Jack and how their problems changed those relationships.

Another storyline involved Jack's estranged father who, as it turns out, is extremely wealthy. It was interesting when he finally did come back on the scene to see how differently the problems and estrangement was seen from both Jack's and his father's point of views.

The storyline involving the budding romance between Bethany and Jack summed up quite well the intense feeling of that first teenage romance and showed quite nicely all the prejudices someone might face if they come from a "problem family".

All in all a lovely little book which was an enjoyable and quick read.

Karen C said…
I've not come across this before but I love it when there are many storylines going at the same time. Sounds like my kinda book.

Raimy from Readaraptor Hatchling said…
wow, this one sounds great. I recognise the cover but I dont think I've read the summary or a review before so thank you for making me add another book to the wishlist! lol
30 June 2011 at 20:56