June 02, 2011
Today I am pleased to host a spot on the Swim the Fly blog tour. Please check out my review on the post I put up earlier today as it is an awesomely funny book. 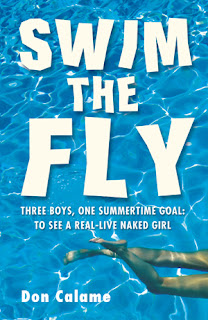 Screenwriting vs. Novel Writing
Mac vs. PC, zombies vs. unicorns, screenwriting vs. novel writing.
Age old subjects that can be argued and discussed until one is blue in the face.
I have my opinions, of course.
I like Macs. They’re more fun, intuitive, and virus free. (I was a PC guy for many years, so I know the pros and cons of the opposition).
As far as mythical/fictional creatures go, I should probably choose zombies because they seem more macho, but I think I’d give the edge to the unicorns in a full on battle. (They’ve got the reach advantage with that horn.)
And then there’s screenwriting vs. novel writing. This one is not so easily decided. Because I happen to love movies and books equally. I also enjoy writing for both mediums and so I can argue for either side.
On the film side, there’s the excitement of seeing your words come to life on the big—and little—screen (or the disappointment of seeing how much has been changed by the time it has gotten there). There’s the money, of course. Screenwriting pays pretty well (assuming you can manage to get something sold). And then there’s the “glamor of the movie business”: the people, the premieres, the studio backlots (which, granted, is pretty cool in the beginning but becomes rather ordinary fairly quickly).
On the practical side, writing a screenplay is quicker. Which for someone like me, with a kitten-like attention span, works quite well. You only have a hundred (a hundred and ten, at the most) pages to tell your story. At three pages a day (which is my daily quota) you can complete a full length feature film script in just under two months.
The flipside is that you need to be incredibly disciplined in your writing. There’s no time to meander. It’s get to the point and keep things moving. Structure and action are key and there isn’t much in the way of getting into a character’s thoughts and feelings. It’s the actors and actresses who will portray those aspects, hopefully.
Also, writing for the screen is a much more collaborative process. Often there will be several producers involved, each with their own ideas about the story. Then there’s the director, the actors, the cinematographer, the casting directors, set designers, costume designers, etc. Each person along the way will have some influence on how the story is ultimately told.
Novel writing, on the other hand, is a very different animal.
Swim the Fly is my first novel and as I wrote a rough draft I mistakenly approached it very much like writing a screenplay. (Though, perhaps it helped me in some way at least to finish that first draft.)
Still, one of the initial notes I got back from my editor when it was accepted for publication was: this is not a movie. You have more time to spend with your characters and storylines. Explore them more and let them breathe a bit.
It was a liberating experience and the rewriting of the novel saw several new characters emerge (like Ulf, Matt’s intense life-saving course instructor) and several fun characters take on much bigger roles (like Grandpa Arlo, Matt’s mischievous grandfather who goes about hitting on the unsuspecting, recently-widowed Mrs. Hoogenboom.)
What I discovered working on this book (and the two subsequent books I’ve written) is that writing a novel can be a much more creatively fulfilling process. Because you have a wider range of devices and techniques at your disposal.
You have the extra time, as I’ve mentioned. But you also have the luxury of getting inside your characters’ heads. Exploring how they see the world. Their memories. Their emotions. You have the opportunity to use all of the human senses to create your world.
It’s like having a full toolbox to build a house instead of just a hammer, screwdriver, and wrench.
But beyond all this, with a novel, it’s the author’s story in the end. Yes, you work with an editor to flesh out your book. And if you are lucky (as I have been) you’re editor is very smart and talented. But, unlike in the movies, the novelist has the final say about what goes on the page.
On the financial side, however, writing books tends to pay much less than writing screenplays. Unless, of course, you happen to be J.K. Rowling or Stephen King. Which the majority of authors are not.
So, screenwriting or novel writing? If I had to choose one, which would it be?
At this very moment, I’d tell you novels. I love the freedom it gives you as a writer. I love that the story that ends up in the book is one I’ve worked out myself (with the help of my editor, of course), and I love working with the full range of tools in the novelist’s toolbox.
But ask me next week, next month, or next year and I might give you a different answer. I might enjoy the need for more structure, for more economy, for more collaboration.
Because, both novels and screenplays have their appeals.
In that respect the debate is nothing like Mac vs. PCs (or zombies vs. unicorns, for that matter).
In the end, one’s choice will vary with what one feels like writing at the time.
The link for Don’s book trailer: http://www.youtube.com/watch?v=bPVjqZNDbeg
The link to the first chapter: http://www.templarco.co.uk/fiction/tasters/SwimFlyExtract.pdf
The link to the Templar Fiction Facebook page: http://www.facebook.com/templarfiction
And the link to the Templar blog post detailing the tour: http://templarpublishing.blogspot.com/2011/05/swim-fly-uk-blog-tour-27th-may-to-5th.html