Review: My Sister lives on the Mantlepiece by Annabel Pitcher 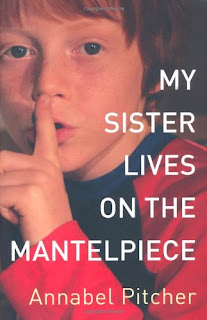 Ten-year-old Jamie Matthews has just moved to the Lake District with his Dad and his teenage sister, Jasmine for a 'Fresh New Start'. Five years ago his sister's twin, Rose, was blown up by a terrorist bomb. His parents are wrecked by their grief, Jasmine turns to piercing, pink hair and stops eating. The family falls apart. But Jamie hasn't cried in all that time. To him Rose is just a distant memory. Jamie is far more interested in his cat, Roger, his birthday Spiderman T-shirt, and in keeping his new friend Sunya a secret from his dad. And in his deep longing and unshakeable belief that his Mum will come back to the family she walked out on months ago. When he sees a TV advert for a talent show, he feels certain that this will change everything and bring them all back together once and for all.


***
My sister Lives on the Mantelpiece is a heartwarming and heart wrenching tale about a young boy and how he copes once his family falls apart after his sister was killed by a terrorist attack.

The story is told from the perspective of Jamie a 10 year old boy. A lot has happened to him in his short life. His sister died, his parents split up and he was moved half way across the country for a fresh start. What is really touching about this story is the way in which he deals with all these changes and holds in all together when his family, his parent in particular, are falling apart. He is told he has to be sad and miss his sister but he doesn't really remember her and can't understand why his Dad is so upset with him not being upset about losing her. He can't quite see things from his parents view. It is heartbreaking to see the way in which the other members of the family close down to Jamie leaving him feeling more and more alone in their own attempts to deal with what has happened.

I think this book is quite brave in the way in which it deals with racism within Britain. Jamie's father is obviously very bitter about the loss of his child and goes from blaming the one or two people involved to blaming all Muslims in Britain. I actually think this is a not uncommon mindset in some areas of the UK especially with some of the older generations who live in these small villages that are still untouched by multiculturalism. The issue was tackled well in how Jamie's Dad's view were contrasted against the real life experiences Jamie had when he met Sunya a Muslim girl of his age in school and was developed in the relationship that was built up between them.

All in all a brilliant debut novel from a British author which tackled a variety of issues in a sensitive manner.

Mystica said…
A new book for me. Having come out of a civil war running for decades in Sri Lanka and quite conversant with attitudes of generations past who do not seem to be able to get over the labels, this must be a good book of a subject as you say sensitively handled. I'd like this on my TBR list.
27 June 2011 at 08:51

Michelle Fluttering Butterflies said…
I've heard nothing but wonderful things about this book. I've checked it out from the library but I keep putting it off so that I can clear some of my own books. It sounds as though I really should get to reading this book sooner rather than later..
28 June 2011 at 11:58

Jesse Owen (Reading to Life) said…
I've been dying to read this book for ages - and I agree with the above, I've heard nothing but praise for this book. Fab review :D
3 July 2011 at 18:23