October 10, 2010
In my Mailbox is hosted by the awesome Kristi at www.thestorysiren.com

I had an awesome week this week bookwise. I did many happy dances at the front door whilst in the process of opening packages. 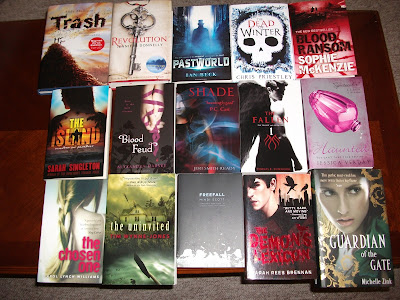 I can't tell you how appreciated this little package was from Bloomsbury this week. I got home on friday after a hellish week at work (think 5am start and a bus load of 14 year olds on a 15 hour round trip and you're starting to get the picture). Thank you very much Emma.

Revolution by Jennifer Donnelly
I am super excited about this one as I enjoyed her first book A Gathering Light and I do love historical fiction. I love the UK cover much more than the American one.

The Dead of Winter by Chris Priestley
This book looks mega creepy. I do love reading stuff by UK authors. I believe it is also set in East Anglia - yay!


Pastworld by Ian Beck
This looks like an awesome book - the village meets victorian england meets big brother. I have never heard of it before but am super excited to read it soon.

Blood Feud by Alyxander Harvey
I must admit I wsn't the biggest fan of book one but I am told that this is a series which keeps getting stronger so I am quite interested to give it a go.

I got a lovely email a while back from Jenny at wondrous reads saying I had won her prize pack from her Simon and Schuster week. I was so incredibly excited about it although I wasn't entirely sure what it contained as I love love love everything I have read so far published by Simon and Schuster. I got the following books along with a super cool tote bag, some buttons, some lovely postcards and bookmarks and some posters. Thank you Jenny and Simon and Schuster. You made my week.

The Chosen One by Carol Lynch Williams
This books is awesome and definately one of the best I have read this year. As I have already read it the lucky kids at school will be getting it for their library as I definately think it is one they should read.

Shade by Jeri Smith-Ready
Another wicked looking book based on a girl who can see ghosts - maybe not one to read late at night!

The Haunted by Jessica Verday
I've been meaning to get the first book in this series for a while - this is the second book so I deliberately haven't paid it too much attention. I may have to pop over to Amazon and make a purchase.

An awesome week for swapping. I am actually moaning a little bit that I hadn't had any takers on www.readitswapit.co.uk for a while and then all of a sudden they all came through at once.

The Island by Sarah Singleton (Simon and Schuster)
I put this on my wishlist a while back as I remember seeing an interview with someone high up at Simon and Schuster and they said this was one to watch out for (I think it was on wondrous reads but I could be wrong). I am quite looking forwrd to it - the premise reminds me for a book I read years ago called Losing Gemma.


The Uninvited by Tim Wynne-Jones (Candlewick Press)
Another one I saw elsewhere thought it looked good and it happened to pop up on readitswapit. Looks creepy.

The Demon's Lexicon by Sarah Rees Brennan (Simon and Schuster)
Yet another author I have heard is good but I haven't got round to reading yet. Looking forward to it.

The Guardian of the Gate by Michelle Zink (Atom)
I've only just got into this series - the lovely Emma at asamum's book utopia sent this to me as a swap. Thank you muchly.

Trash by Andy Mulligan (David Flickling Books)
Heard loads of good things about this. I happened to see Foyles had a signed edition on their website so I ordered it while they still had them. Sounds really good.

Freefall by Mindi Scott (Simon Pulse)
I have had my eye of this for a while and totally forgot that I preordered it. Looks really good.

A truly fab week, thank you to everyone who sent me things.

Misha said…
You've got some Great books!I am looking forward to Revolution.
Here's what I got In My Mailbox
10 October 2010 at 08:51

prophecygirl said…
Yay for the S&S goodie bag! Glad it all arrived safely :D And Bloomsbury are ace eh? I think you'll like Pastworld, it's brilliant and was one of my 2009 favourites. Enjoy!
10 October 2010 at 10:37

Vicki said…
oh wow you did have a great week! Blood Feud is sooo much better than MLLB, The Chosen One just blew me away, Shade is fantastic too...hope you enjoy!
10 October 2010 at 10:58

Yiota said…
I really want to hear more about Gaurdian of the Gate! Can't w8!

iffath said…
Amazing books this week! A truly fantastic set! Shade is probably my favourite of them all, hope you enjoy it! :D
10 October 2010 at 12:33

Sabrina said…
What a great book week!!! I also had a hellish week and books always brighten my mood a lot.

Thanks for stopping by at my blog, I'm now also a follower of yours. It's always awesome to meet other European book bloggers.

Fi-chan said…
:O such a pleasant picture, so many books!

Jenny said…
You got fantastic books this week! I really want to read Shade, I love the sound of it and I've heard good things. I also want Guardian at the Gate as I enjoyed Prophecy of the Sisters. Can't wait to see what you think of those 2!
10 October 2010 at 14:45

Samantha (A Dream of Books) said…
Wow, you got some great books this week. I'm looking forward to reading 'Shade' by Jeri Smith-Ready, as I keep hearing fabulous things about it.
10 October 2010 at 15:17

Anonymous said…
Your gonna be busy busy busy! Can't wait to hear what you think of them! My IMM is here: http://nikkibrandyberry.wordpress.com/
10 October 2010 at 15:27

the story siren said…
WOW!!!! look at all those beautiful books! you've got some great reading ahead of you! Hope you enjoy them all! Happy reading!
10 October 2010 at 15:34

Christi said…
Great list this week! I really like the Chosen One, too, and Freefall was also IMM this week!

StefanieEmmy said…
I read Pastworld a few month ago, I so love the idea of this theme park! I do hope they'll build something like this in the near future ;D

Kathy Martin said…
What a great week! Enjoy all your books. My mailboxes are here and here. Happy reading!
10 October 2010 at 16:23

Belinda said…
You got some amazing books this week!! Hope you have fun reading and I look forwar to your reviews.

Karen said…
I like your Shade cover better than the American version. It fits the MC too. I want to read Freefall - it looks like a good one.
10 October 2010 at 18:16

Adriana said…
You got so many great books! Revolution is one I'm really looking forward to reading, so I can't wait to see what you think.

LJ said…
Wow, you got a ton of books in! I haven't read any of them, but they look great! Can't wait to hear about them. New follower. Thanks for coming over to Reader Recommended :)

Gabrielle Carolina said…
I am dying for Revolution. I love Northern Lights! I agree, the UK cover is smarvelous!

Kelly said…
Wow you had a fantastic week! I recently read The Chosen One and thought it was a really interesting read, hope you enjoy all of your books! :)
10 October 2010 at 20:15

Kate said…
Thanks for stopping by my blog earlier. Enjoy your books!

Sarah Mohamed Saghir said…
incredible!!! can you please let me know what you think about the uninvited by leaving a comment on my blog ppleasee thanks

Jackie said…
Thanks for stopping by my mailbox post Kirsty and cannot wait to see what you think of "The Fallen" and "Demon's Lexicon"! Very nice list of loot, enjoy the goodies!!!

Little Miss Becky said…
So much great stuff this week! I loved Guardian of the Gate. That cover of Revolution is just gorgeous, I'll probably order that one instead of the US one!
10 October 2010 at 21:24

Tara said…
I loved Revolution and Freefall! You're right - you did have an amazing book week! I hope you enjoy them all :D

Anonymous said…
I hope you enjoy your books :) I'm also keen to read Shade, except that's the only cover I can find and I definitely prefer the US one - the red and blue just don't work very well together, lol.
10 October 2010 at 22:11

brandileigh2003 said…
Great reading! My IMMB is here Be sure to check out my giveaway for Minder or Adversary, Nightshade, and my cover re-creation contest!
Have a great Sunday!
Brandi from Blkosiner’s Book Blog
10 October 2010 at 22:46

Tara said…
What a fantastic bunch of books! I've heard a lot of great buzz for Freefall and I still want to read Fallen. Enjoy!
10 October 2010 at 22:53

Lizzy said…
You got a ton of great books this week. I hadn't heard of The Dead of Winter, but it looks really creepy. I'll have to check this one out. Happy reading
10 October 2010 at 23:07

Joli @ Actin' Up with Books said…
You have some really great books here. Congrats on winning the prize pack at wondrous reads. I really am jealous, but in a good way! Have reading! I bet your TBR pile is insane.
10 October 2010 at 23:43

Rachel said…
Wow, you did get lucky this week :) You have some great books there! I have added some of them to my list :)

Books Unbound said…
aww, i think it´s great that you commented in german :)
I am quite jealous of some of the books you have there... have fun reading them!
11 October 2010 at 17:29

Becky said…
Hi Kristy, thanks for visiting my blog!

Wow... Great haul! I loved Revolution by Jennifer Donnelly... it was fantastic.

When you've finished, there's a song in my review you should listen to... I think that it really works well with the story. :)
Review here: http://escapismthroughbooks.blogspot.com/2010/08/review-revolution-by-jennifer-donnelly.html
12 October 2010 at 00:51

Kulsuma said…
Wow! That is an awesome haul! I look forward to hearing about Trash, The Uninvited and The Island!:)

Joanna said…
Thanks for taking the time to follow :)

Vanessa Morgan said…
What a wonderful package. You've got a lot of books to look forward to. Shade, The Fallen and The Dead of Winter seem to be right up my alley.