First, a confession: I have a kindle and so many of the books I have been reading recently are stored on there, which is frankly a relief, because my loft is groaning with books and there isn’t any more room on my bookshelves.

On my kindle I have an awful lot of YA, including such excellent books as AE Rought’s Broken, Kresley Cole’s Poison Princess (I can’t wait for the sequel), Maggie Steifvater’s entire oeuvre, Ilsa Blick’s Ashes, Blake’s Anna Dressed in Blood, Meyer’s Cinder, White’s Paranormalcy series, Lou Morgan’s Blood and Feathers, Ash, Divergent, The Daughter of Smoke and Bone and so on.

Being a typical girl, I have also loaded my kindle up with ‘naughty books’ that Andy (my husband) doesn’t know about.  Ilona Andrews (her Edge books are brilliant), JR Ward (Black Dagger Brotherhood), Jennifer Estep (Assassin), Gena Showalter (Lords of the Underworld): my guilty pleasures.

But you don’t want to hear about my kindle here.  You want to know about my bookshelves.  My main shelves are in the study, which we recently renovated.  They are from Ikea.  I love them.

Periodically they rotate.  Some of the books on my shelves go up to the loft and some in the loft come down.  Currently my loft contains a lot of science fiction and fantasy: David Gemmell, Stephen King, Tad Williams, George RR Martin, Robin Hobb, Simmons, Baxter, Asimov.

The bookshelves in the study have a core of texts that don’t change.  These are my reference books, my favourites, my old friends.  As you can see, they also include my Leeds Book Award (I had to put it up high as it is made of glass and the four year old was showing a worrying interest in playing with it).  There’s no real system.  I’ve got TS Eliot next to Beowulf, Tolkien next to the family Bible, Malory beside an old edition of Jane Eyre, the Love Letters of Elizabeth Barrett Browning beside an old book of Irish Poetry and an A-Z of London.   I have Ted Hughes Tales From Ovid next to Edmund Spencer’s Faery Queen and Ezra Pound’s Cantos.  Angel’s Fury (my first book) is up there somewhere too. 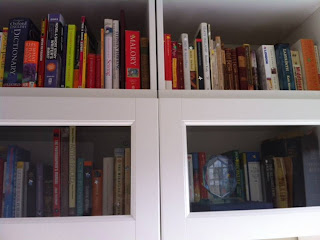 Beside that shelf I have this one.  I have allowed my husband a bit of space here, so you’ll find some maths text books and Cryptic Crosswords on the bottom, covering up Umberto Eco and friends.  Above it are more favourites, Don Juan, The Color Purple, The End of Mr Y, The Good Soldier, Margaret Atwood, Iain M Banks, Jonathan Strange and Mr Norrell, a few ‘Chinese’ books – The Tale of Murasaki, The Book of Loss and so on. 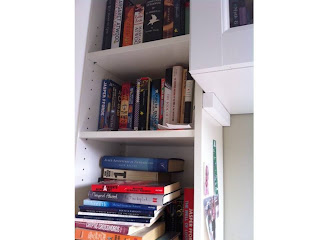 On the other side, behind closed doors … the start of my naughty pleasures collection, pre-kindle: Shannon McKenna, Lori Foster, Jenny Crusie (Welcome to Temptation, Faking it and Bet me are big favourites).  Also my more organised ‘Author collections’: so all of my Janet Evanovich (I love her Stephanie Plum books, although I feel that she has now jumped the shark, so I stopped at 16), all the Kelley Armstrong books (from Bitten to 13), everything Terry Pratchett has written (I’m am such a huge fan) and all of Anne Macaffrey’s books (again I’m a huge PERN and Brawn and Brainship fan – between them Macaffrey, Gemmell and Stephen King were my biggest reasons for writing). 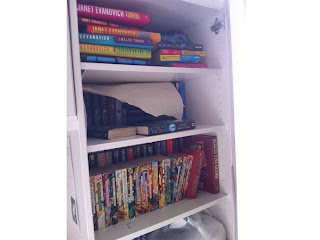 In the hallway outside the children’s rooms sits my YA bookcase. It is packed full (doubled up on all the shelves) and contains some real favourites such as Eoin Colfer, Garth Nix, Tom Pollock, Sarwat Chadda, Gillian Philip, Kathleen Duey, Julie Bertagna and there are even a few Enid Blyton in there … 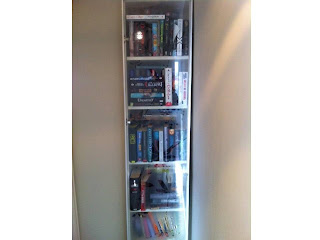 The children each have a bookcase in their room although my daughter’s actually tend to be all over her floor (I’d like to yell at her and make her clean her room, but I seem to recall my own room being similarly carpeted when I was a child and don’t feel that I have a leg to stand on).  She likes Rainbow Magic (although is finally growing out of these!), Ottoline, Mr Gum, Lemony Snicket, Dick King Smith, non-fiction books about anything.
My son has a bookcase full to bursting with picture books.  He has loads about bears from his ‘bear phase’ when he was two and everything had to be about bears.  Now he is into dinosaurs (Captain Flynn and the Pirate Dinosaurs, Dinosaur Cruncher etc), pirates (The pirates next door) and superheroes (Chabon’s Awesome Man, DC Superheroes etc).  He also inherited quite a few from Maisie, so we have an awful lot of the wonderful Julia Donaldson and lovely books like Guess How Much I Love You, No Matter What and various things about princesses.  He is also starting to read himself, so a few early reader books are creeping in.

Some of the picture books are my real favourite too, Ten Little Fingers and Ten Little Toes, The Beasties and so on.

I could go on all day, but you don’t want that.  You have lives and books of your own to get back to.

So you can see my shelves are as eclectic as I am, a bit dark, a bit poetic, a bit nostalgic, a bit funny.  This has been a really fun post, poking around those shelves.  I think I’m off to pick a few to put by my bed for later.  Goodbye kindle.