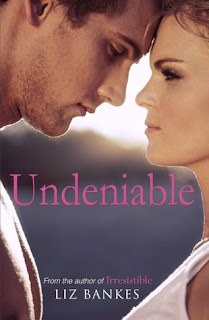 1) To start tell us a bit about your new book undeniable.

Undeniable is the story of Gabi, a character who appeared in my first book, Irresistible. She’s funny, loud and a bit mad, but the story finds her completely out of her comfort zone. She’s left her friends for the summer to be an intern on a teen drama and is newly single. On her first day she meets Spencer, an extra on the show and a bit of a charmer. Meeting someone new was the last thing on her mind. But even if she is ready, can Spencer be trusted?

2) I love Gabi as a character. Where do you draw inspiration from when writing as her?

I am so glad that you like her! I really wanted readers to like Gabi, more than any other character, because I like her so much. And I think when you’ve spent so long writing as the character, you get a bit protective!

Gabi wasn’t initially going feature in Irresistible all that much, but she gradually began to take over and kept popping up in scenes! I loved thinking of things for her to say, because she’s someone who never thinks before she speaks, so I try to imagine taking off the that conversational filter that I usually have firmly switched on. Changing to writing as her was quite similar, but gave the opportunity to show when something different, and possibly surprising, was going on underneath the chatty surface.

3) I love that undeniable featured characters from your first book. Will you be writing more books involving Gabi and her friends?

Yes, they will be back! The third book is going to have two narrators – Cleo (Jamie’s slightly scary girlfriend from book one) and Rosie, who is one of Gabi’s gang in book two. Rosie’s quite a quiet and reserved character in this book, so hopefully it will be a chance to get to know her better!

4) Would you classify your books as YA or NA? Is there a difference?

Can I have both?? The way I see it (but I may not know what I’m on about and be talking rubbish) is that YA is anything written for and dealing with the concerns of young adults. NA at the moment seems to be an area of YA that particularly focuses on contemporary romance – stories set at the age where those experiences are indeed new. Characters are the point of entering the adult world – nothing is decided and everything is possible. These are things I find fascinating as a writer and so they are explored in my books.

When I’m writing I imagine me and my friends when we were teenagers. I loved books about relationships and particularly liked it when the characters were my age and it felt like the book was written ‘for me’. You could read about sex and relationships in adult books, but there was something special about a book that spoke to young people directly – like Forever by Judy Blume, which did the rounds at my school and made the name ‘Ralph’ funny for life. I’d like to attempt something like that with my books – although obviously Judy has set the bar rather high!

5) Which other authors do you take inspiration from?
When I was a teenager I read a lot of romantic comedies for adults (I still do, of course!), by authors like Sophie Kinsella, Marian Keyes and, The Godmother – Helen Fielding. I have writers like those – plus Cecelia Aherne and Nick Hornby – in mind for trying to get a balance of funny and feelings. Other children’s/teen writers I love and want to learn from are Louise Rennison, Marcus Sedgwick, Luisa Plaja, Andy Robb and Caroline Green – I could go on and on and on!I am also a bit obsessed with Jane Austen.

6) What has been your favourite read of 2013?
By day I am an assistant editor at Catnip books, with a happy side effect being that most of my reading is taken up with children’s/YA. I read Song Hunter by Sally Prue at the beginning of the year, which is an absolutely beautiful book. I thought the second Geekhood by Andy Robb was fantastic. I LOVED the new Louise Rennison, just as I LOVE everything she writes. See how I snuck three in there? Mwa ha ha.

7) If you could throw a dinner party for five fictional characters who would you pick and why?

Bridget Jones, because if I did something embarrassing, like spill wine/food/dribble down myself, she would probably go and get locked in the toilet or something equally shameworthy and we could bond.

Georgia Nicolson, because she’s funny and could get the party going with a Viking horn dance.

Jane Austen’s Emma. My favourite Jane Austen heroine is actually Lizzie Bennet, but I think Emma would be fun at a party because she’d start matchmaking everyone with eligible men/gropey vicars she knows and that would be good for some party gossip. Also she’s rich, so would bring posh wine.

Katniss from the Hunger Games, because she’s practical and if there was a food disaster (likely if I’m cooking) she could go out and catch a squirrel.

Anna Karenina. She could probably do with a fun night and friendly conversation, rather than being stared at and called a harlot the whole time. And I could offer her my spare room so she doesn’t have to go and get the train.

As I’ve picked five women, it’s got a bit of a hen party vibe, so could I have a butler in the buff? Mr Darcy will do nicely.

Escapism Fanatic said…
I like the description of New Adult books given by Liz.