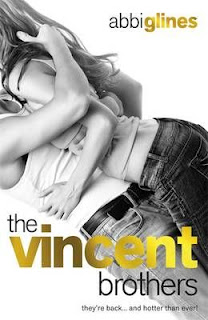 Sawyer Vincent is still heartbroken over his breakup with Ashton Grey - made worse because he lost her to his brother - but Lana McDaniel thinks she might just have a cure. Lana's lived in her cousin Ashton's shadow all her life, but now she's taking the lead and is determined to make Sawyer her man. But can she be sure that Sawyer's not just using her to get back at Ashton? And what if Sawyer sees through her new sexy version of herself and discovers the shy, geeky girl she used to be? THE VINCENT BROTHERS picks up where THE VINCENT BOYS left off - with twice the fun, twice the excitement and twice the sexy.

I'd been waiting excitedly for this book for a while and while I'm not sure if was as good as the first one in the series it certainly was an enjoyable read.

For me the appeal of this book was without a doubt the hot boys. While I don't think it was as steamy as the previous book in the series it certainly had enough there to keep my hot boy quota happy. I must admit I did enjoy seeing another side to Sawyer compared to the person we saw in the previous books and I loved seeing the relationship between him and Lana develop as the book went on but as I've already said it didn't quite do it for me in the same way that the first book did. There were bits in the book where they both go a bit too extreme in their reaction to gossip and that bothered me quite a bit. Surely if they like someone you find out their side of the story first before reacting and running from a situation?

I must admit I did not at all like the Harry Potter esque epilogues. They were so cheesy and so unnecessary and I'm not sure they give out the right message about what the readership of this type of book should be aiming for. But then you could say that about much of the NA genre at the moment.

An enjoyable read all in all although not as good as book one.

Deniz said…
interesting! it one of those books ive been meaning to read...but never got round to. Will definitely give it a try :)
nice review
11 March 2013 at 19:45

hibilala said…
After reading your post, I am looking forward to this. Your post is particular useful, plz keep going. Runescape accounts for sale is also cool!
12 March 2013 at 00:40

So Many Books, So Little Time said…
I enjoyed the first book but wasn't that impressed with the writing or characterisation. I'll still read this if you think the hot boy angle is enough to get through it! :)
12 March 2013 at 14:10